This past weekend was the Inaugural run Disney Dumbo Double Dare: run the Disneyland 10k on Saturday and the Disneyland Half Marathon on Sunday to complete the challenge- and get another medal!

Matthew and I signed up for this in January and had been anxiously awaiting these races. It's always exciting to run through Disney but for us this was REALLY exciting for a number of reasons: 1. Running through Disneyland (neither of us had been), 2. Running in the inaugural DDD, 3. Getting our Coast to Coast Medal. If you run a half marathon (or more!) on each coast/park in one calendar year, you earn the Coast to Coast Medal. Pretty freaking sweet.

This will be a LONG blog post but I'll cover the expo and both races; and maybe a little bit of the parks too!

The Expo
Let me say this, I have been to hell and have lived to tell the tale. Disney expos are always crowded. There are always lines. But this expo was the absolute worst I have ever seen.

We got there early- way early. The expo opened at 10 am in the Disneyland Hotel. We arrived to the outside of the hotel around 7:15. We wanted to get in line for the limited edition New Balance run Disney sneakers. They are only offered at the run Disney expos and usually only around 1,000 pairs are made. So, we wait in this line (in the HOT California sun!) until 8:30 am- at this point, the New Balance guys come out, fit us for shoes, and give us a ticket so we can leave the line and just pick up the shoes at any point that day from the expo. Awesome, we can leave the line, right? Not exactly.

When we left this line, we stood in another line to get into the expo- there was some official run Disney merchandise that we knew would sell out pretty quickly so we wanted the first crack at it. Luckily, we made some awesome friends in the shoe/expo lines! It was great to meet other people who share our passion for running and all things Disney. They made the time spent in the lines much easier to bear.

There was yet another line for packet-pick up- we knew we'd be coming out to this later so we stayed in the merchandise line.

At 10 am, the expo opened and chaos broke out immediately. People were running, grabbing shirts, and clamoring to get to the checkout. We quickly grabbed the things we wanted and got in line. We probably only waited about 20 minutes to check out. Once we had checked out, we walked outside (back into the 90+ degree heat) to get in the packet pick-up line. It was insanity. This was the line- all wrapped around the hotel- with NO SHADE.  It took me about an hour to get to packet pick-up. There were also several times when the lines would get confused and the run Disney folks had no idea how to fix it. Warm weather and long lines made for a lot of hostile people waiting in this line. 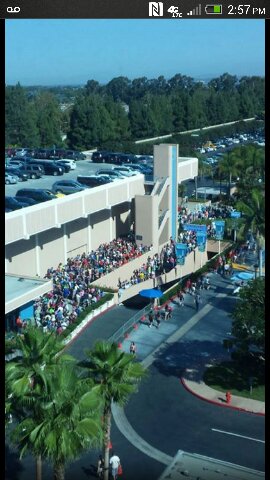 Once we saw this line, we decided that Matthew would go inside and pick-up the New Balance shoes and I'd get the packets. After about an hour, he was able to find me in the line and pick up our packets together.
Once we had packets, we then had to wait in ANOTHER line to get back into the expo to pick up our shirts. All in all, it took about 4.5 hours to get all we needed to get done. Usually we are in and out in less than an hour.
Even though it was hot, disorganized, and generally frustrating; we still left with our merchandise, new shoes, and bibs for the races.
The coolest part of the expo was meeting some of the people who blog about running. I met three of the folks whose blogs I regularly read- I was star struck! I found most of these people through the team #runDisney facebook page or blog. This community has been so positive and amazing- I'm so glad I found it! If you've been debating running Disney, just try reading some of the posts here and I'm sure you'll be convinced!
The 10k
I have a new favorite run Disney race- the Disneyland 10k! For as horrid as the expo was the day before, the 10k was an absolute dream. With almost 4 of the 6 miles in the parks, this race was absolutely what a run Disney event should be!


I should also mention here that it was hot. And humid. Like really, really disgustingly humid. The 10k started at 6:15 am so the sun was already up and shining. The temps were around 90 degrees with about 65%  humidity. It really felt worse than that.

After the first two miles, we entered the back of Disney California Adventure through Cars Land. It was magical. I'll let the pictures show you... 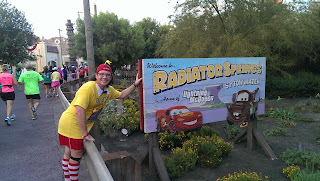 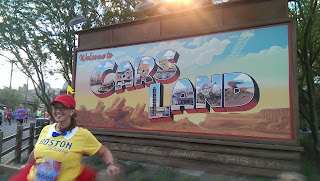 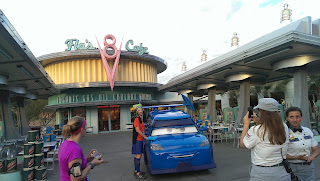 Then we ran through the Paradise Pier section of DCA and then underneath a tunnel that lead to Disneyland!


We entered Disneyland and ran down Main Street, through Tomorrowland and Mickey's Toon Town, and then back through Sleeping Beauty's castle. I do have to say this- after running through Cinderella's castle, Sleeping Beauty's was a tad underwhelming. But cool, nonetheless.

Once we were through the castle, we had just under a mile to go to the finish. A quick jaunt through downtown Disney and we were back where we started- just with shiny new medals this time :-) 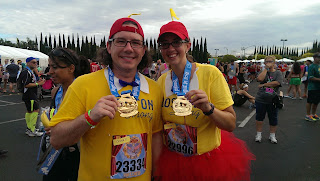 The Half Marathon
We woke up on the morning of the half around 3 am. We were meeting friends in the lobby at 4 am to take the shuttle over to the start at 5:30 am. We stayed about 1.2 miles from the start of the races- sometimes we walked over and sometimes we took the free shuttle. **Side note- I was hurting this morning. We spent all of the day before in the parks. Normally, we don't do much on days we have back to back races but since we aren't in California often, we wanted to see as much of the parks as possible. The next morning, I had a lot of pain in my knees and my hips- which normally never happens. Luckily, we had brought some biofreeze along to the race and after I applied that, I felt amazing!**
We got right on a shuttle and were in our corrals by 5:00 am. One big advantage to Disney World races is that at Disneyland, you don't have to be at the race so early. At Disney World, you have to wait for a shuttle to take you to the race area, then you have to wait for the corrals to open, and then you have to walk the 20 or so minutes back to the corral just to wait another hour or so for the race to start. At Disneyland, you simply walk down to the start about a half hour before the race starts. Beautiful :-)
At 5:30, the race was off and running, so to speak. We started similarly to the 10k- a few miles outside the parks then into DCA and then Disneyland. We ran the first 4-5 miles in twilight- the sun wasn't up yet so we were relatively cool. It was still around 75 degrees at the start and still pretty humid.


Running through the parks was just as magical as it was the day before. We were able to get a few character pictures before heading out on the long stretch to Angels Stadium.


Once we were finished in the parks, we began the long haul towards Angel Stadium (mile 9ish). This part of the race was not so fun for two reasons- the sun  was coming up and we were running on miles and miles of boring highway. Granted, Disney provided some entertainment on the course- cheerleaders, bands, dancers- but it felt like a normal half marathon at this point. And did I mention the sun?!

After what seemed like a long time, we arrived in Angel Stadium. I'm not much of a baseball fan but rounding home plate was a very unique experience. 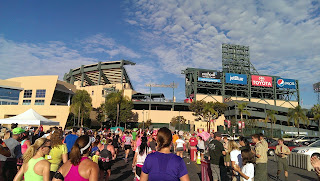 Once we were through the stadium, we only had a few more miles to get to the finish- thank God! This race was just SO hot! Besides the sun and humidity, there was another annoying element to this race- some of the course was on a dirt trail- this kicked up a lot of dust into my eyes and throat-not cool while you're trying to run.

That being said, there were also some really cool aspects to this race- the "unofficial" race stops manned by spectators. There were at least two stations set up with candy, orange slices, pretzels, water, Band-Aids, Vaseline, and hilarious signs.

Overall, I am so glad we made the trip out to California for this challenge. It was a great warm-up to the Dopey Challenge, we got our Coast to Coast medal, and we were able to get the much sought after New Balance run Disney shoes. More importantly, we made lots of new friends and created some amazing memories :-)

I also just have to give a big shout out to my awesome boyfriend and running partner, Matthew. Though he's a much faster runner, he always stays with me and coaches me through all our races. I wouldn't be able to finish without him. Thanks, Matthew- you are simply awesome :-)

So, that's the whole, long story of our trip. Look for a review of the NFL Back to Football Run later this week!