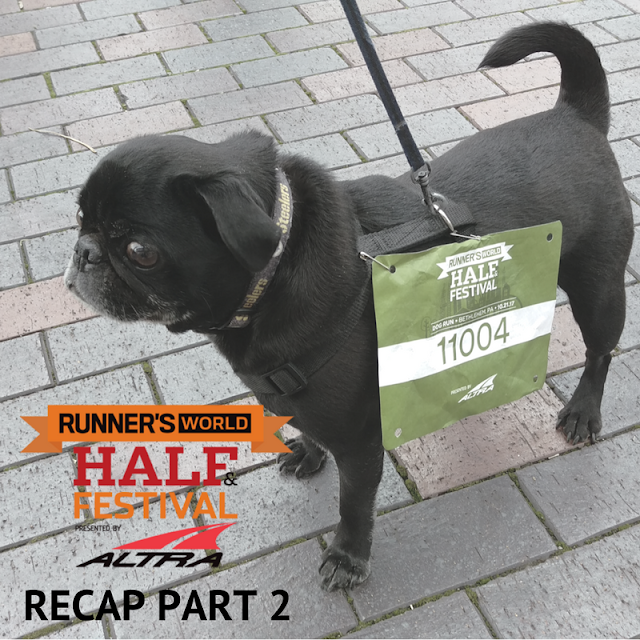 When we last left our weekend story, Zoe and I were headed to bed early Friday night. I woke up early Saturday morning, a bit sore but ready for the double-header of races: 5k at 8 am and 10k at 9:30 am. Zoe and I got ready and walked downstairs to meet up with the rest of the crew from yesterday including Kiera and Takia from City Fit Girls and Laura from Mommy Run Fast. Eric, from Dirty Old Sneakers, had to return home to a work emergency and we defintely missed him Saturday morning!

We were staying about three quarters of a mile from the race start so we left the hotel around 7:15 am. Matthew's parents and family friends, Mr. and Mrs. C., were also en route to the race start as they were driving in for the day to see me and Matthew in between the 5k and 10k. Matthew's hotel was a few miles outside of Bethlehem, so on race morning he drove into the Steel Stacks parking lot and hung out there until I joined him at the start.

Once at the race start, we grabbed a few pictures and then got ourselves lined up for the 5k. There aren't corrals for this race, rather there is signage for pace and everyone was expected to line up where they belonged.


Matthew and I lined up at the 12:00 minute/mile pace sign and talked a bit about our race strategy... basically, take it nice and slow and enjoy running with each other. The race started in staggered waves based on pace; we were in wave 3, aka the last wave and the party wave!

The 5k course was pretty scenic with a few rolling hills. Compared to the trail race, which had an elevation gain of 579 feet (!), this 5k's elevation gain of only 77 feet felt flat and fast. We chatted our way through 3.1 miles and finished with an overall pace of 12:22. One of the things I loved about this race was that we were able to see our speedier friends on an out-and-back section of the course. It's always fun to be able to cheer on other runners during a race! :-)

Matthew's family met us at the finish line and we had about a half hour to catch up with them before we had to get back out to the start for the 10k.

After hanging with Matthew's family for a bit, we left them in the ArtsQuest building and went back to the start to toe the line for the 10k. The weather was warming up quite a bit so I took off my long sleeved shirt and left it in my bag and with bag check before the second race.

Again, we lined up at the 12:00 pace sign and again we started in wave 3. The 10k course follows part of the 5k course in reverse and was much hillier- there was an overall gain of 176 feet. We ran through several downtown streets and the course was truly beautiful. And it ended up being near-perfect weather for running, if not a bit warm. 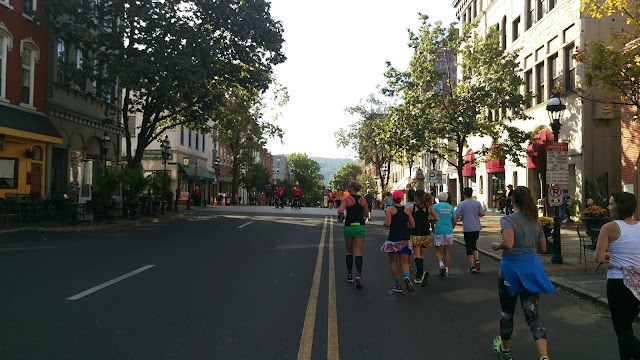 Around mile 5, Matthew's mom texted him to let him know she had a surprise waiting for us at the finish. We speculated on what it could be but for some reason we never guessed what it actually was... beer! They actually bought us two beers and passed them to us right after we finished- even before we got our medals! Another benefit to having the ArtsQuest building so close to the start and finish lines; access to beer! 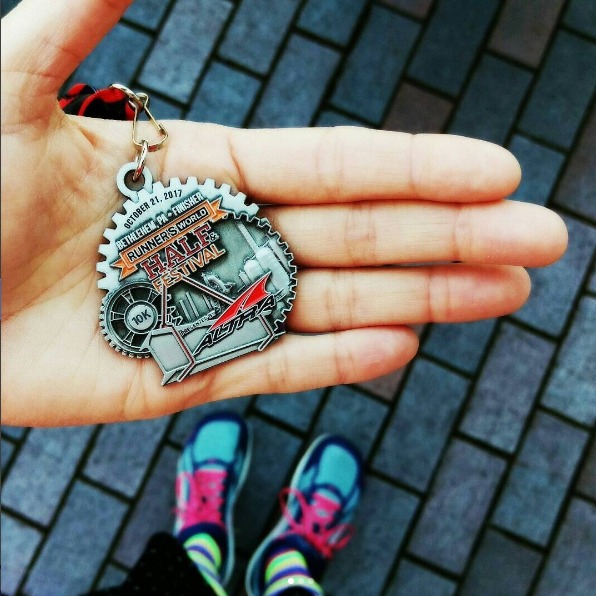 Everything about this race weekend was easy; bag check, start lines, lots of port-a-potties, an option for a "real" bathroom in the ArtsQuest building, etc. It was convenient to have all the races start and finish in the same place and convenient to have the ArtsQuest building/expo directly next to the races. The whole process was uncomplicated- which I appreciated immensely as there was so much going on during the weekend.

After the race, I shopped in the expo a bit and then headed back to my hotel to shower and then drove out to Matthew's hotel to pick up our sweet pup, Koda, for his first-ever race!

Koda and I made our way back to the Steel Stacks- the 5k/10k finish line was the start of the dog run, I pinned his bib to his harness, and we got ready to line up with all the other dogs.


I can only describe the dog run in two ways: controlled chaos and pure, unadulterated joy. I giggled the entire time I walked Koda in the race- it was so absurdly funny to me to see all the dogs (there were probably close to 100) with bibs and costumes on trying to run a race. The official dog run was two, half-mile laps but since it was getting pretty warm out and Koda has some struggles breathing in hot weather, we only did one half-mile lap and called it a day. And just like a real runner, Koda had to stop and poop halfway through the first lap, ha!

You can see more of the dog run in this Runner's World article; you might even recognize a few familiar faces about halfway down the page. :-)

After the dog run, Matthew took Koda back to his hotel and I headed back to my hotel to get ready for drinks with the Runner's World Editor-in-Chief, Betty Wong Ortiz (!), and the pasta party.

Drinks with Betty (and the rest of the RW crew and bloggers) were awesome and the pasta party had some delicious food- it was definitely the tastiest pasta party I've ever been to! The dinner also was a sort-of tribute to Bart Yasso as he is retiring from Runner's World this year. There was a slideshow of pictures of Bart through the year and there was even a cake with his face on it :-)

After the pasta party, we walked back to the hotel, said our goodbyes/good nights, and tried to get a good night's sleep- a 13.1 mile tour of Bethlehem waited for us in the morning!

Stay tuned for part 3- you don't want to miss it!