In the midst of the insanity that is wedding planning, I've finally gotten my stuff together enough to post an Accountability Monday! [high fives self]

This damn ingrown toenail has thrown a real wrench into my training plan for the Pittsburgh Half Marathon- which is next weekend (!). After last month's Shamrock Half, my left big toe was a little tender and red. I let it go for a few weeks, chalking it up to having just run a half marathon. But two weeks ago, I finally went to the podiatrist- she diagnosed me with an ingrown toenail. Whomp, whomp.

Luckily, it is in the beginning stages and won't require any surgical intervention- yet. I've been soaking it twice a day in hot water and epsom salt and putting pieces of cotton under the edge of the nail to encourage it to grow out instead of in. In two weeks, the swelling has gone down considerably and the pain has lessened substantially. Yesterday I was able to run three relatively pain-free miles. Fingers crossed it doesn't give me any trouble during next week's races in Pittsburgh- 5k on Saturday, half marathon on Sunday.


Food Find:
This weekend, Matthew and I were out of town visiting family and we made a trip to a Wegman's- we don't have one close to us so I don't go to one very often. I had heard that they carried a specific type of low-fat, low-sugar ice cream called "Halo Top" and I was anxious to try some when I found it in the store.

It. Was. Amazing! Seriously, I ate the whole pint (two cups) and it was only nine points! Regular ice cream would have been 27 points for the same amount! 27! Do yourself a favor this week and get to a Wegman's so you can have some of this delicious little bit of heaven.

Non-Scale Victory:
I went to a baby shower yesterday and did not take the favor home- it was a little carton of M&M's and Animal Crackers. I ate a few and left it on the table- had I taken it, I would have eaten it all in the car on the way home and wasted points on food that I can get any day of the week. Leaving food on the table will always be a huge victory for me :-)

Enjoy the last week of April! What are you looking forward to in May?


That about sums it up.


When Jen asked me a few months ago if we (meaning me and Matthew) wanted to go down and do the Shamrock Half Marathon again, I wasn't too keen on going down. For one, Matthew and I have been trying to save money as our wedding is literally around the corner (30 DAYS!). Secondly, driving to VA Beach is a pain in the butt because of this little town in Virginia called Fredericksburg. It doesn't matter what time of day you travel through this town, there will be ridiculous amounts of traffic. I just don't understand it. Anyways, Jen enticed me with free race photos (because Shamrock is AWESOME and totally has the runner's interests at heart) so Matthew and I registered for the half.

You may recall that my current PR is from this race in 2014 and last year in 2015, this was my "don't call it a comeback" half marathon that was also my little brother's first half marathon. So Matthew and I were both very familiar with the course and knew we would have an amazing time at the race. J&A Racing (the company that puts on Shamrock) really puts on a phenomenal race: flat course, gorgeous medals, beautiful tech-shirts, finisher's hat and beach towel, four post-race beers, live entertainment on-course and at the after party, and new for 2016, free race photos! How could we have said no?

So super early on a Saturday morning, we left our homes in south central PA and started driving down to VA Beach. The expo closed at five pm so we had a deadline to meet. Then all the DC/VA traffic happened- mid-day on a Saturday. A drive that was supposed to take five hours ended up taking close to eight! We mad-dashed into the expo a little after four pm and grabbed all the goodies we wanted before they closed at five. They were selling last year's long-sleeved cotton 8k shirts and beach towels for $1 so we all bought some for the next day as throw-away clothes- the weather was predicted to be a little rainy and cold; in the mid-30's to 40's for most of the race. After getting what we needed, we carb-loaded at a little pizza shop close to our hotel and crashed early.

The next morning, it was clear I had not packed enough for the weather- I think it was around 39 degrees and extremely windy. I had a thin tank top and thin long-sleeved shirt. Luckily, Jen let me borrow her Under Armour Cold Gear long-sleeved shirt. I wore the tank, a pair of pants, and calf compression socks as my base layer and then the Under Armour shirt, a Sparkle Athletic skirt, a Cold Gear Under Armour hat, my finisher's hat from last year, gloves, and a light rain jacket as my top layer. It really wouldn't matter what we wore because the moment we got parked near the start line it started raining. And I don't mean, a little light rain that feels awesome when you run. I mean, an ice-cold, windy downpour that stings your skin. Reluctantly, we all decided to leave our phones in the car and made plans to meet up after the race back at the car where we could at least sit in heat and warm up.


The towels that we brought were soon soaked through as we huddled together in the corral waiting to start. Jeff and Matthew were going to run their own races; Jen and I were going to stick together. Any hopes I'd had of running a fast race were gone the minute I looked outside to see the weather. This was going to be a "just get to the damn finish" kind of race.

When it was finally our turn to start, I was honestly super worried that I wouldn't be able to finish. It was absolutely freezing and miserable. Had we not driven the eight hours to get there, I might have not even gone to the starting line- it was that awful out.

Once we got moving, it got a little less miserable. Miles 1-4 were pretty uneventful as we ran through the neighborhoods toward Fort Story. The rain started to let up about an hour into the race; after we were already soaked of course :-) Thank God for free photos because I'd left my phone in the car- didn't want to risk it getting ruined in the rain!


Once we got into Fort Story, we made a quick pit stop at the medical tent for Jen- she had a toe that was rubbing another toe and irritating her so she needed to get a band aid. The true testament to friendship is helping someone get a wet, sweaty sock off their foot and then helping get it back on, mid-race :-)

Jen and I kept a close eye on our mile times and were surprised with how consistent and (semi)fast we were being. Each mile was hovering between 11 and 11:30. Even with the wind in Fort Story, we were able to keep pushing the pace and concentrating on getting to the finish line. My current half PR is 2:28 and while I knew we wouldn't reach that, I was hoping for anything sub 2:35.


Once we left the military base, we headed back on the long stretch towards the boardwalk finish. Highlights of this part of the course? Listening to The Imperial March from Star Wars being played as we cruised through a water/aid station with cookies! Also, the mimosas around mile five were oh so refreshing! There was plenty of beer on the course this year but Jen and I declined- we were waiting for those ice-cold Yuenglings at the post-race party.

The last few miles felt like they would go on forever.  I was so glad Jen was with me because she really helped push me out of my "comfortable pace" zone and kept us hovering around the 11:30 minute mile mark.

At last, we saw the finish line as we turned onto the boardwalk. All I could think about was getting somewhere warm and out of these soaking wet clothes. We raced towards the end and crossed the finish line at 2:35:41; just 42 seconds over where I wanted to be. 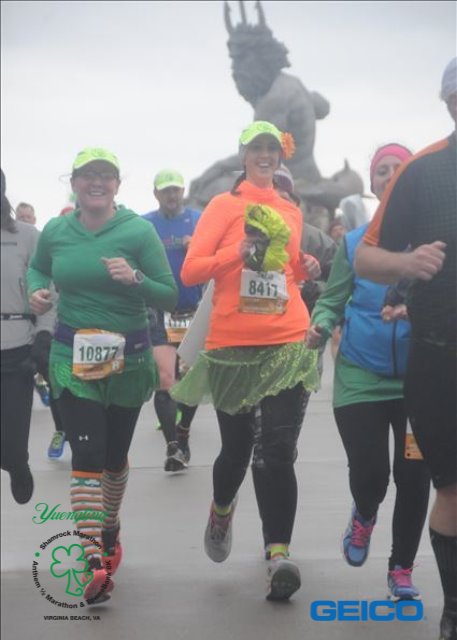 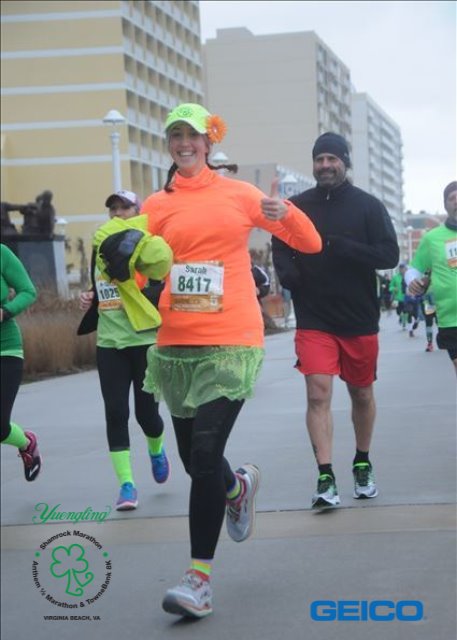 Jen and I got our medals, our finisher's hat, our beach towels, tons of food, and a cute bag to carry it all in. Then we headed towards the party tent to get some hot stew, a cold beer, and then head back to the car. On our way into the tent, we found Jeff but didn't end up seeing Matthew (he went straight back to the car). After a beer and some pictures on the beach, we went back to the car to warm up.

After an awesome hot shower, we got back on the road and began our long, traffic-filled journey home. While no one can control the weather, J&A did a fabulous job of still making the race enjoyable for the runners. Cold rain and wind are never good conditions to run in but... it does make me feel like a total bad ass for running my second-fastest half marathon in terrible weather conditions.

So, will we be back for a fourth year in a row? Maybe! The drive sucks but the race and the organization is superb to other races. Time will tell if we do this one again but overall, it was a great experience- even if the weather was terrible! :-)


Have you ever run a half marathon in cold/rain/snow/terrible weather? Share your stories and strategies below!