When we last left off (see Part 1 here) we had just gone to sleep at 9:30 am. We'd finished the 5k and come back to the resort, had a little breakfast, and then got in bed. We set our alarms for 5:00 pm and were sound asleep by 10 am. I took a Tylenol PM so I was guaranteed to fall asleep.

Matthew and I ended up waking up around 4 pm and were totally awake so we started to get ready. We packed a bag for the after party with jackets and a change of clothes for each of us.

Around 6 pm, we left our room and walked to the resort cafeteria to get dinner. We each had chicken parmesan with pasta and a piece of bread. I also had a sugar cookie. We'd packed granola bars and Clif Shot Bloks for the race.

At 7 pm we got in line for the bus to take us to Wide World of Sports. We stayed at Pop Century so in minutes, we were at the starting area. There were lines for 4 characters: Mickey, Minnie, Goofy, and Chip & Dale. We chose to wait in line for Mickey.

After getting our picture with Mickey, we grabbed the food we needed from the bag and then dropped it off at bag check. While we were running, they would take the bags to Epcot. After bag check, we found a place to sit and wait until it was time for us to move to the start. Run Disney always does an excellent job with the pre-race entertainment- there was a great DJ who was playing music and playing games with all the runners. There was even a proposal- so sweet!

While we were waiting, we met up with friends from all over the country- Joe and Chris from Philadelphia; Kathy and Betty from Seattle; and Jennifer, Chris, and Amy from Florida. It was great to hang out with all our running friends- especially since we had just about 2 hours to kill before the corrals opened up.

Before we knew it, it was 9:15 and time to get in the corrals. Unlike the WDW half/full, you don't have to walk a mile to get to them. Once in the corral it was just a waiting game until it was our turn to start. There were fireworks for each start and near the start line there was a champagne bottle and glass- bubbles were floating up from behind it- so cool.


We started the race and headed towards Animal Kingdom. It is pretty cool running at night- there's no Florida sun beating down on you and it seems to go so fast in the dark.

Animal Kingdom is a little hilly and super dark- they used glowing cones to help illuminate the course.


After a short run through AK, we headed out of the park and towards Disney's Hollywood Studios. I should note that at this point, I started getting some of the worst stomach pain I've ever had during a race. I don't know if I drank too much water or what, but from this point on until the finish, my stomach was in knots. I think I need to adjust my fueling strategy as I keep adding on miles. I don't want to relive that pain again.

The course from AK to DHS is short, maybe a 3- 4 mile trip and I thought it went by pretty quickly. There was plenty to see and the on-course entertainment was really on-point! There must have been at least 5 DJ's and all were playing great music! There were also all kinds of light-up characters on the course. Around mile 8, there was a video detailing the highlights of the after-party and it definitely made me want to hurry up and get there!

Soon, we were in DHS! I will let the pictures do the talking- we must have spent at least 10 minutes in the Dancing Lights section just taking pictures and walking around. This is my favorite run Disney race for this part. It is breathtaking.

These next pictures should show you just how long we stayed in this section :-) 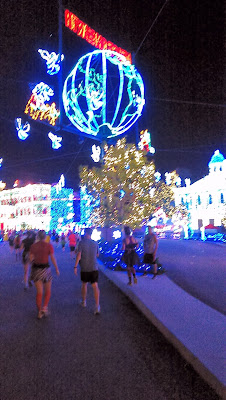 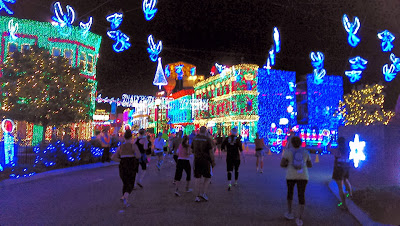 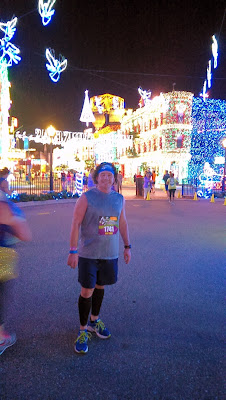 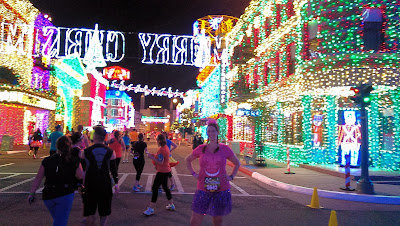 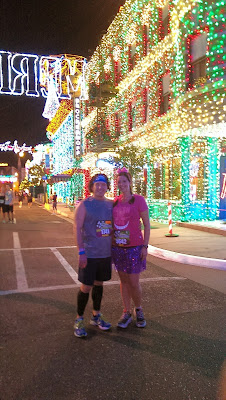 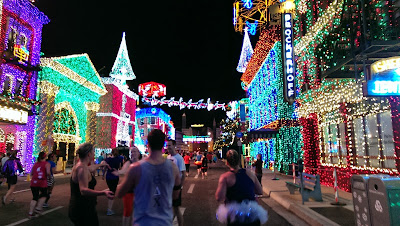 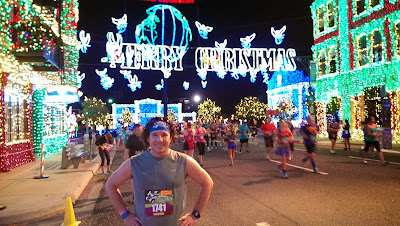 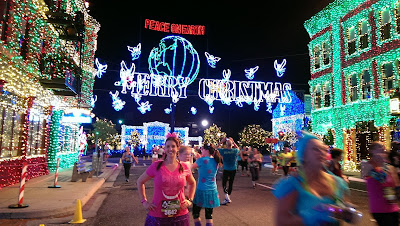 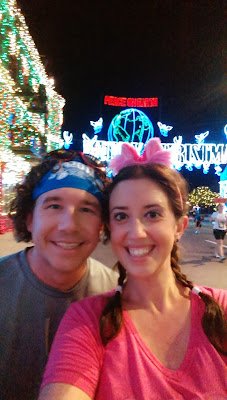 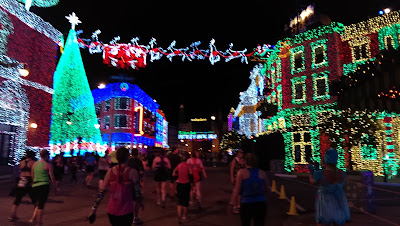 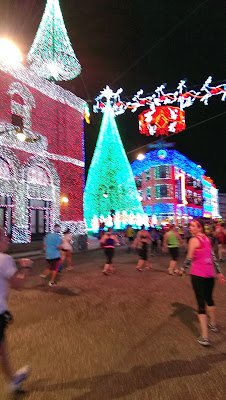 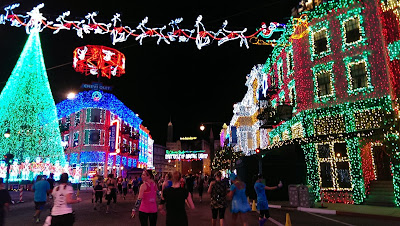 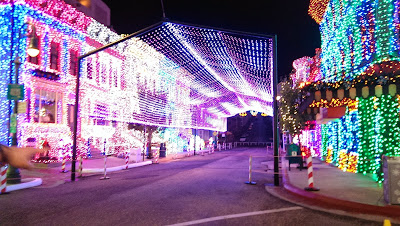 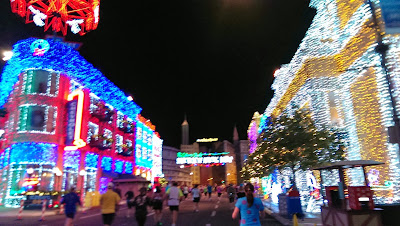 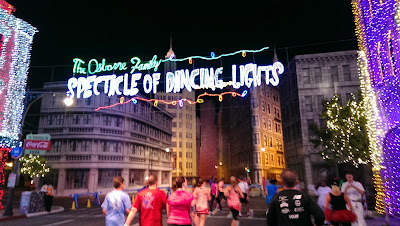 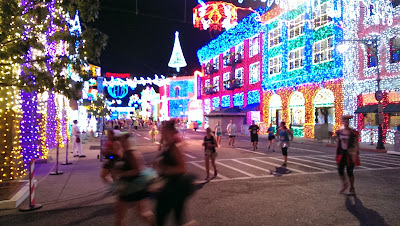 Once we made it through DHS, we were on our way through the boardwalk and on to Epcot! The back pathways to the boardwalk were so congested- this is my least favorite part of the race. But, we only had a few miles until the finish.

After a very quick jaunt through Epcot, we rounded the corner, ran through the fog and light show, and we were done!

After getting our medals and free beer, we walked toward the masses to get to the after-party. Once through the gate, we headed towards World Showcase. To do this, we needed to cross the course that runners were still coming through. There were crossing points set up with Disney Cast Members trying to herd people through. After standing in a massive line for 10 minutes without moving, we finally found our own space to cross the course. Besides that part, the after-party was really a blast!

We were able to connect with some of our friends and walked all through World Showcase. We grabbed wine from the Florida Local booth and perogies from Poland. Then we rode Maelstrom in Norway and walked right on to Test Track. What was so cool about the after-party was that all the Cast Members were so excited and enthusiastic. They were singing and dancing and congratulating each and every one of the runners. It was just a fun and festive environment to be in. At 4:00 am we finally decided that we were exhausted and should get home to get some sleep. We walked right over to the bus and were back at our hotel in minutes. We finally fell asleep at 5 am.


From the pre-race entertainment to the fun, 3-park course, to the very enjoyable after-party: I loved everything about this race. This is easily my favorite run Disney race and I am looking forward to the 5th anniversary next year!
Posted by Sarah S. at 10:43 PM