This past weekend was the 4th annual Wine & Dine Half Marathon in Walt Disney World. I've participated in this weekend before (5k in 2011, 5k and half in 2012) and I have to say, this is my favorite Disney race!

There are two races as a part of this weekend- both on Saturday. Mickey's Jingle Jungle 5k starts at 7 am and takes place in and around Animal Kingdom. The half marathon starts at 10 pm the same day and covers three parks before ending in the Epcot parking lot. After the race, runners are treated to what run Disney calls the "ultimate runners night out!" in Epcot. Selected rides and food kiosks are open for runners until 4:30 am. *Spoiler- it was the ultimate way to end a half marathon!*

This post will review the expo and the 5k. Find part 2 here.

Expo
After the disaster that was the Disneyland Half Marathon Expo, I wasn't sure how Disney would respond to make this a better experience. But they absolutely did.

On Friday we left our hotel at 9:30 am on the run Disney provided shuttle bus. If you stay on Disney property at one of the "host" hotels for the weekend, you have access to shuttled rides to all race weekend activities- it's incredibly convenient.

The expo was held at ESPN Wide World of Sports and was supposed to open at 10 am on Friday. We got there around 9:40 and were able to walk right in to pick up bibs for both the half and the 5k.

In our packets, we received our bibs, a $10 Disney gift card, and a bracelet to wear as our admission "ticket" to the after party. After picking up the bibs, we walked to a different building to get our shirts and explore all the vendors.

As usual, there were plenty of vendors at the expo and tons of run Disney and Wine & Dine specific merchandise. I had no problem getting a few t-shirts, magnets, and other items. There was a lot in stock and the line moved very quickly. After purchasing some official merchandise, we walked to the back of the expo to pick up our race t-shirts. Again, no issues or lines picking up shirts.

For the 5k, we got a dark green cotton t-shirt with the 5k logo. The half shirt was a unisex, black long-sleeved shirt with the Wine & Dine logo on it.

There were plenty of vendors, free food, and other cool stuff at the expo. The crowds were never overwhelming and we were in and out within an hour. This was a very organized, well-stocked expo. 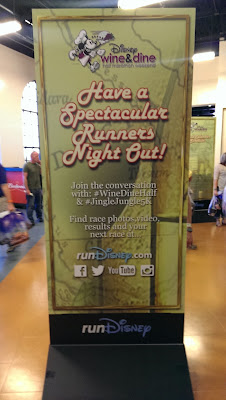 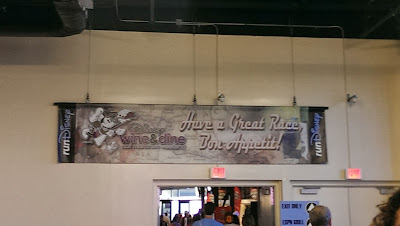 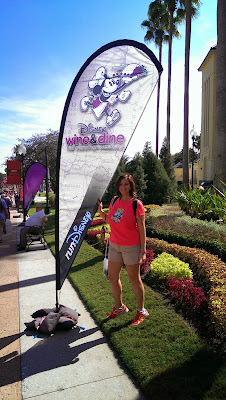 After the expo, we stopped for a quick lunch at Raglan Road in Downtown Disney and then headed over to Magic Kingdom for Mickey's Very Merry Christmas Party. If you are ever in Disney around the holidays (Christmas starts November 1 in WDW), this is a must-do. Christmas in the Magic Kingdom is simply beautiful. And it definitely got us in the holiday spirit for the Jingle Jungle 5k the next morning! 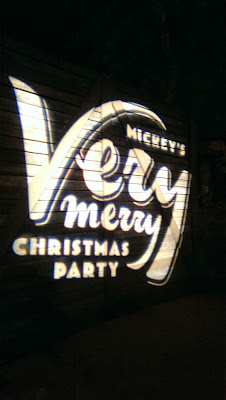 Jingle Jungle 5k
We woke up early on Saturday (4:00 am to be exact) and were on the bus to Animal Kingdom by 5:00 am. The race course starts and finishes in the AK parking lot. Before the race there are usually characters and a DJ playing music to get everyone pumped up. The race started at 7:00 am and we wanted to be there early to get our annual picture with Mickey and Minnie.


However, it seemed like everyone else had the same idea. The line for Mickey and Minnie was insanely long and we decided to skip the picture. We did find a shorter line for pictures with a run Disney sign and a wintery background. While waiting in line, a Marathon Foto photographer asked to get a picture of us for possible use in marketing. It was later posted on the run Disney facebook page- so even though we didn't get our annual character photo, we got an excellent quality picture :-)


After dancing around and chatting with our friends Kathy and Jennifer- both of whom we met through run Disney!- it was time to get into the corrals. Matthew and I were both in A which was absolutely amazing. I have no idea how I ended up in the first corral but it was so cool to be in the first wave.


While passing time in the corral, I was looking at facebook and saw that some runner friends, Pam and Christine from We Run Disney, had posted their costumes for the 5k and that they were in corral A too. I grabbed Matthew and said, "let's go find them!" The social part is the best part of running for me :-)

As we were walking towards the front of the starting line, someone yelled my name. It was Christine! It was so great to connect with these two and chat about the weekend and recent races/training. I still can't believe I've met them in person- they have an awesome blog and are such cool and inspiring people. It was awesome to see them again this weekend.

﻿﻿
Before we knew it, the national anthem was being sung and we were getting ready to race! Instead of fireworks, there was snow and fog to start each wave. We started out by making a large loop around the parking lot and then continuing into the park.

We ran through parts of Africa, Asia, and Discovery Island before exiting the park, doing a quick out and back behind Everest and then continuing to the parking lot for the finish.


The course was slightly different this year- usually the out and back section went out to Rafiki's Planet Watch and back. While that route was cool because you could see actual animals, the smell of said animals in the early morning Florida heat wasn't as cool. The course route this year was much better and we spent more time in the park.

After the 5k, we went back to the room and were asleep by 9:30 am. After all, we had only a few hours until our next journey of 13.1 magical miles began!