Then, just a few days before the event, two bombs went off at the finish line of the Boston Marathon. Three people were killed. Hundreds were injured. The suspects had not been apprehended. It was surreal.

The running community was in a state of shock. How could this have happened? Who could have done such a thing? Why? Will they ever find who did this? I posted this response on facebook:

I still can't seem to wrap my head around the Boston Marathon tragedy. I've stood where those spectators stood. I've followed my runner, cheering him along the way for miles and miles. I've pushed my way through the crowd at the finish line, camera in hand, desperately trying to catch a glimpse of my runner completing the race. I've stood where they've stood.

The marathon is an amazing feat. I've watched several of them. And each time, I'm moved to tears by the runners and their spectators. This sport is about so much more than running. It's about strength, discipline, confidence, determination, hope. Nothing, NOTHING can take that away.

Today the finish line was blackened. But you can't keep the running community down. The athletes, the spectators, the volunteers- you can't take away that spirit.

All that week, I stayed glued to the news, listening/hoping/praying that the suspects would be captured. On Friday, it seemed like the authorities were close. One suspect was dead; another was believed to be hiding in a Boston neighborhood.

That Friday after work, Kelly and I sat on the couch, not speaking, transfixed by the scene playing out on the news in front of us. Later that night, Matthew had driven down from Philadelphia (where he lived at the time), and then the three of us huddled on the small couch, praying that the authorities would find the suspect and that no one would be harmed in the process.

Our cable suddenly went out- so we used a radio app on one of our phones to listen in as they finally captured the suspect. I could feel every tensed muscle I didn't realize I was contracting release. They got him. I slept soundly for the first time in five days.

The next morning, April 20, 2013, was beautiful. Sunny, warm, without a cloud in the sky. Matthew, Kelly, and I lined up at the starting line of the Sole of the City 10k. We'd worn Boston Marathon colors (yellow and blue) along with thousands of other runners at the request of the race organizers. A runner was making her way through the crowd passing out yellow and blue support ribbons she'd made. We each took one and pinned it to our bibs.

The National Anthem was sung. There was a moment of silence. Then we started the race by running under an enormous American Flag.

All along the route, there were police officers directing traffic, keeping us runners safe. I thanked every single one. High-fived as many as I could. I spent that race thinking about Boston, the people and families affected, the running community. There was an energy during that race that I'd never felt before, and have not felt since.

I try to live my life with a grateful heart- to be thankful for all that I've been blessed with. That day, that race, I was thankful for so many things: the ability to run, the freedom I have because of the country I live in, the police officers that keep me and my family safe.

It's been almost a year since the Boston Marathon bombings. I will line up at the start of the 2014 Sole of the City 10k next weekend, just as I did in 2013. And I'll run this race thinking about all I have to be grateful for, and praying for those lost or injured, just as I did in 2013. This race has become representative of what I love about the running community- support, solidarity, strength. And I'm looking forward to running it again this year and every year. 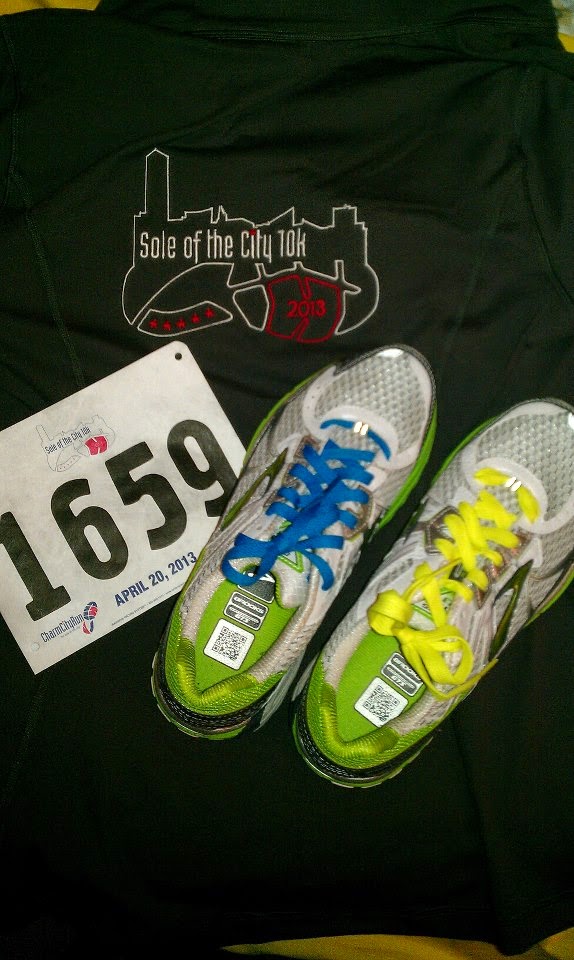