Welcome to the Virtual Disneyland Half Marathon Blog Hop! By clicking on the icon below, you can learn all you need to know about the upcoming Disneyland Half Marathon Weekend from bloggers who've run through the parks and are eager to share insider knowledge with you! Though Matthew and I are sad we won't be running on the other coast this year, we had such a fun time doing the Dumbo Double Dare in costume last year and are excited to relive the magic again with this post. So, let's get to the costumes!


It's no secret- I love to run in costume. Especially at Disney! When thinking about dressing up for a race, there are tons of things to consider. This post will attempt to answer some questions and provide some tips/ideas for costumed running. 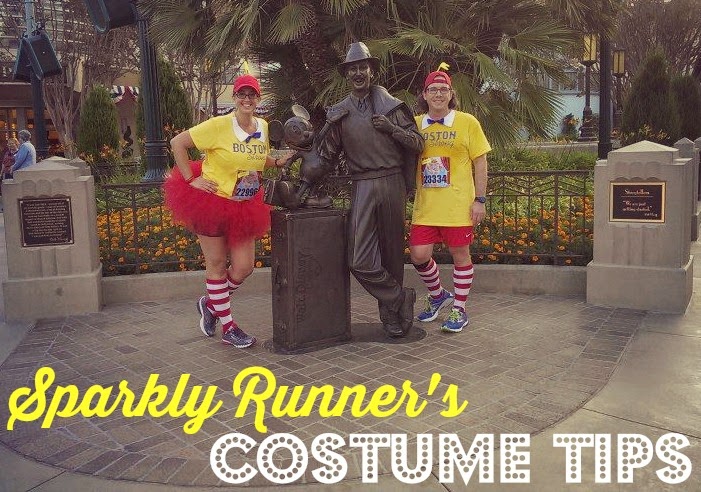 Tip #1: PLAN
Before you even get started on a costume, there is a lot to think about:
When Matthew and I went through the planning process for last year's 10k, we decided that we would dress up as characters from Alice In Wonderland- the theme of that year's race (this year's 10k theme is Lilo & Stitch). Naturally, we settled on the Tweedles because we wanted a costume that would incorporate both of us. We had considered other characters- Cheshire Cat, Mad Hatter, Alice, etc. But, we decided that we wanted to dress as a pair.

We also decided that we would make these costumes and that we wanted to be able to wear everything we'd bought/made again. We also didn't want to spend a fortune- no more than $40 per person. So, I found the red and white socks online for $10 a pair, bought plain red baseball hats at Wal-Mart for $2.50 each, bought the shirts from a seller on etsy for $10 each, made the tutu with supplies from a craft store ($15) total, and then bought felt and ribbon for the collars and flags  for less than $10.

Instead of sewing (which I can't do!), we pinned the collar and bow-tie to the shirt with a few safety pins. It worked perfectly! For the little flags on our hats, we hot glued a pipe cleaner and a piece of felt to the top of the hat- easy-peasy. Then I made the tutu with a tutorial I found online. I'll be creating a fun tutu tutorial in the coming weeks :-) And that was it! Our costumes were ready!

Tip #2: DRESS FOR DISNEYLAND WEATHER AND REMEMBER TO "DOUBLE PACK"
When Matthew and I went out to Disneyland for last year's races, we had no idea what the weather would be like. It was hot. Like stupid hot. And humid. We were not ready for that kind of heat.

Luckily, our costumes were not too hot. I had originally packed capris and was planning to wear those but once we got out there, it was way too hot to even think about anything but shorts. Good thing I "double packed"- my version of being ultra prepared. When I am racing in costume, I always pack extra clothes that I can substitute for parts of the costume. Usually this just means extra shorts/socks/bras, etc. but sometimes I'll pack another entire costume/running outfit in case I change my mind or in case the weather absolutely sucks.

Tip #3: COMPLETE A PRACTICE RUN
This tip could also be "don't run in cotton in California in August!" The shirts that I'd bought us for the 10k were cotton and even though we know better than to run in cotton, we figured we could do it for just 6 miles.

I wish we'd run in these costumes before we wore them so we'd know just how hot cotton shirts and cotton knee-high socks could be.

Moral of the story- run a few miles in your costume before you try to attempt a race in it. You can see how it feels and what needs to be adjusted before you are out on the race course without any way to fix it.

Tip #4: DON'T BE AFRAID TO SHOP AT THE EXPO
Thinking about running in costume but running out of time? Not sure who you'd like to dress as? Lacking skills in the crafty department? Or do you want something a little more subtle- more like a theme?

Disneyland Half Marathon Health and Fitness Expo to the rescue!

Luckily for you, there are lots of vendors at the expo that can help you create a "costume" at the last minute that won't cause anxiety on race day. I've done this a few times- picked up a few extras at the expo that helped me create a cool running costume with minimal effort.

At the Walt Disney World Half Marathon 2013, I knew I wanted to dress like Minnie. So I brought a pair of black capris and a black tech shirt with me. Then I bought a Minnie-inspired Sparkle Athletic skirt and a Red Polka Dot Sweaty Band at the expo and voila! Instant costume! 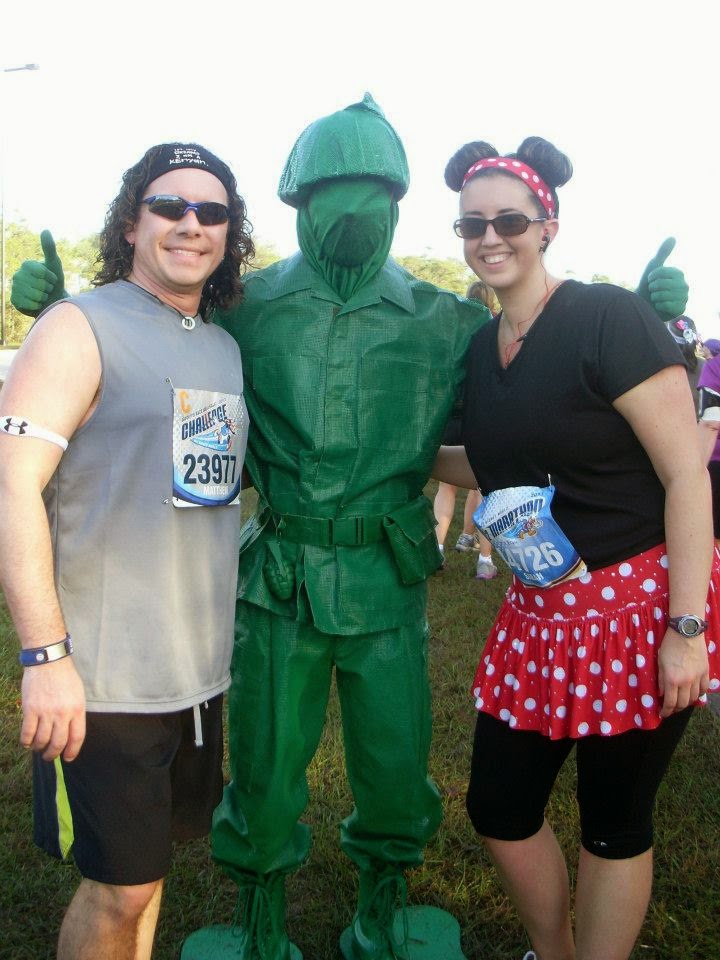 I'm also a HUGE fan of Raw Threads "Good Girls" line. I can make a very simple Princess Tiana costume with one of their shirts and a lime green Sparkle Athletic skirt. 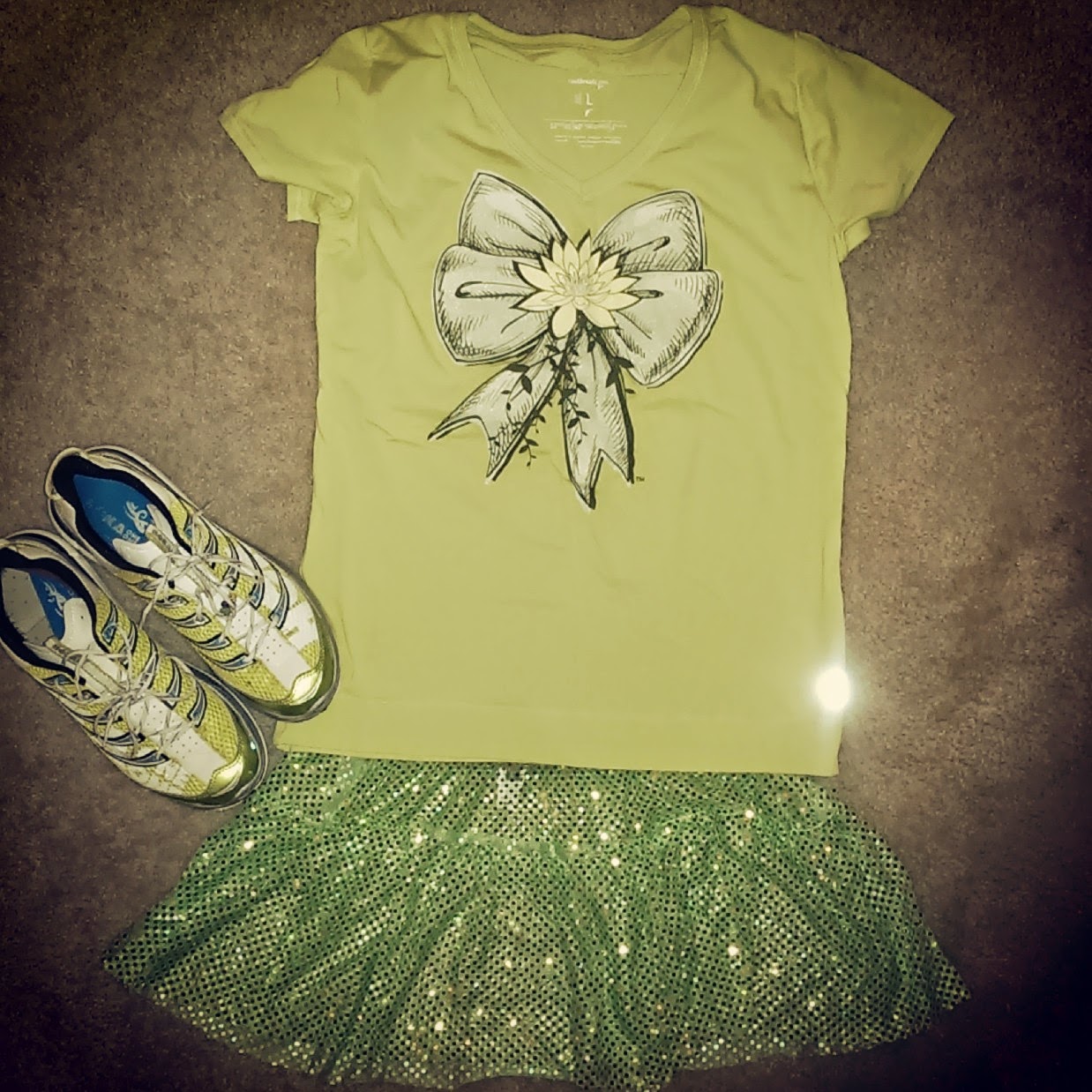 Super simple and fun! And don't worry guys, there will be plenty of vendors there with dude-approved tech shirts so you can get in on the costume fun.

Tip #5: GET CREATIVE!
Since Disneyland is the original park, there are LOTS of costume/character ideas that come to mind. You can also choose to do something related to the theme of this year's race- Lilo & Stitch.

I called on some of the BEST costumed runners I know (from the Running/Race Costumes Facebook Group and some of my BRF's) to contribute their awesome Disneyland Half Marathon Weekend costumes. I think you'll be totally blown away with the creative ideas these runners came up with!

Aren't they all fabulous?!

BONUS TIP- Just by googling or using google image search, you can find tons of blogs and tutorials on costumes for runDisney races. If you've got the time, definitely do a little research and get inspired!

Don't forget to check out the rest of the Virtual Disneyland Half Marathon Blog Hop. And for those of you running down the original Main Street USA in just a few weeks, have a magical race!

QOTD: If you could run as any Disney character, who would it be? Why?