Ok, enough sad talk with my stress fracture, let's do something fun! Let's recap my 15th half marathon, the Divas Half Marathon in Wine Country, DC. It was actually in Leesburg, VA NOT in DC, but that's another post entirely. :-)

As you know from the expo post, this race would be Jen's first half marathon and I'd be representing Enell on the course. We were both a mix of excited and nervous- Jen because she'd never done this before, and me because my foot was acting up and I was thinking about wearing brand new shoes for the race.

We tried to get a good night's sleep (ha!) and woke up bright and early Saturday morning- 5 am. The race started at 7:30 am but our VIP parking lot closed at 7 so we wanted to get there nice and early. From scouring other blogger's recaps from last year, I knew parking would be challenging. In fact, we'd heard that last year the event started TWO HOURS late because parking was all backed up. With the race starting at a rural vineyard with only one road in and one road out, traffic was a nightmare and caused the race start to be late.

We left the hotel around 6 am for our 20 minute drive to the race site. We grabbed breakfast at Starbucks on the way and were happily following the directions until.... a police officer directed us to go another way! Now, try to imagine this- we are in a looooong line of vehicles, it's 6:45 am, and we have NO IDEA where we're going as the way we were told to go was now being redirected. After a few minutes and some wrong turns, we finally approached the VIP parking lot a little after 7. This didn't leave us much time to get ready or give me much time on what shoes to wear. After a long internal debate, I decided to wear my hokas. I didn't feel comfortable changing shoes at the last minute and knew that I could run 13.1 in the hokas.

Once we left the car, we had probably a half mile walk to the start line. So we got to the start with only about 15 minutes to spare. The lines for the port-o-potties was insanely long so we skipped the bathroom and hoped we'd find one on the course. I wanted to check in with two people at this race- Sid Busch and my friend Rhonda. You may remember that I've met both of these folks before during the Dopey Challenge. Rhonda is a dear friend and Sid is just a legend- he's run nearly 200 marathons! It was great catching up with both of these friends as we waited for the race to start.

Somehow, Jen and I managed to be in wave two out of four. At a little past 7:30, we were off! We raced through a bit of the vineyard and then were on paved roads the rest of the race. The course itself wasn't that great- lots of out-and-back sections (that can mess with your head!) and little to no spectators. We ran through many housing developments; some of which were still being built! There were some great views of the mountains and some breathtaking flower fields. All in all, it was just an ok course. I did try to entertain us by counting the men on the course (around 20) and we were able to see Donna (who I ran into at the expo) and Sid a few times and wave hello- that's the good thing about those out-and-back sections. 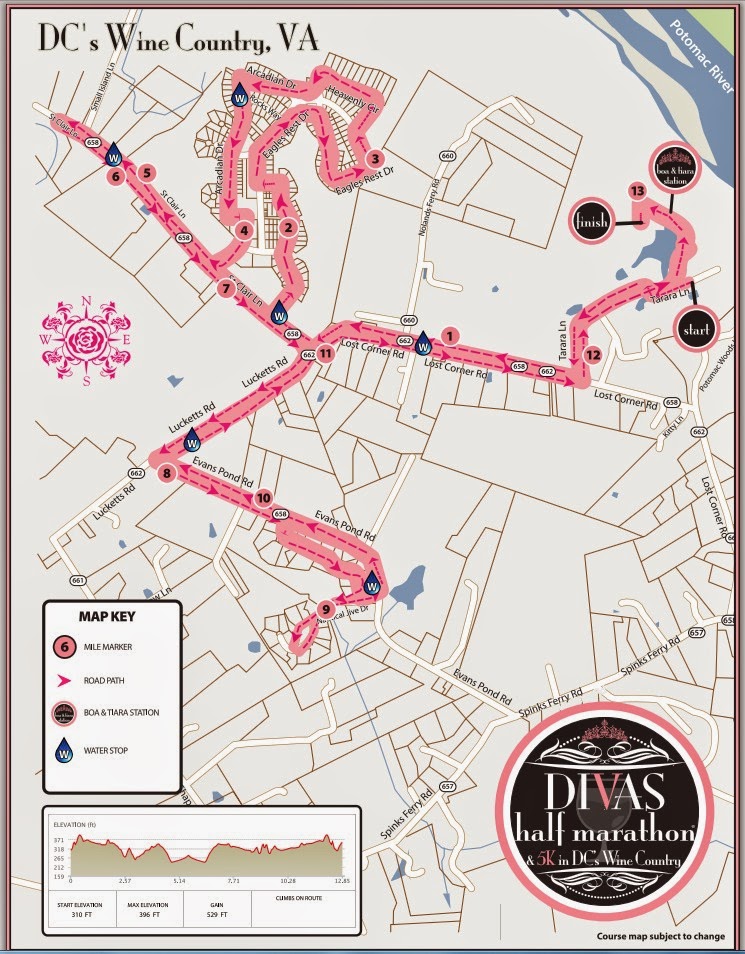 What you can't see on that map is the HILLS! Oh Lord, was this thing hilly! I felt bad for Jen- usually your first half marathon should be nice and flat! We were doing well through the first 10 miles- keeping a nice and easy pace somewhere between 12- 13 minute miles. I promised Jen we would pick up the pace at mile 10 if we felt good. And guess what? We felt GREAT at mile 10 and picked it up like crazy! Our last three mile splits were something like 11:45, 11:30, 11:06- it was fantastic!

As we were racing towards the finish, we were both so pumped and talked about how THIS is why we take walk breaks- so we can pass people like crazy at the end and finish feeling strong. I can't put into words how proud I was of Jen- she had worked her butt off all winter, spring, and summer to do this half marathon- and she was KILLING it! The feeling as we came back into the vineyard, knowing the finish was less than a mile away, was just amazing. It's the reason I run.

As we got close to the finish, there were cheerleaders handing out pink boas and tiaras to finish the race with. We both grabbed them and kept pushing towards the finish. As we crossed the announcer shouted out both of our names- so freaking cool.

We went through the finish chute, got our crazy blinged out medal from some very beefy (and VERY young!) men, got a glass of sparkling cider (no champagne due to VA liquor laws), and waited in line to get an official finisher picture.

We went back to the car to grab a jacket (it was a little chilly and had started to drizzle) and our free wine tasting ticket. After waiting in another looooong line for free wine, we finally had our chance to taste Tarara Winery's Boneyard line- two reds and two whites. Lucky for me, Jen is allergic to red wine and the other ladies beside us didn't like red wine so I got almost two full glasses of red when they shared their samples with me!

I bought a few bottles of wine and then we made the long trek back to the car to head home. There was a finisher party back at Lansdowne Resort from 2-4 pm but we were pretty wiped out from the race so we decided to head back home.

Would I do this race again? Probably not. It was a hilly, lonely, not very pretty course. And the waiting for the wine at the end of the race was not fun. I wish there had been more of an after-party at the actual finish line rather than having it at a second location 20 minutes away.

What worked well for me in this race: My new Enell bra was AMAZING! Seriously, I hadn't noticed how unsupportive my old one was until I had a newer, smaller size on. Ladies, replace your Enell at least once a year- if not once every six months. You can really notice the difference when you're in a correct size and newer bra. It was heavenly to run in! :-)

I'm glad I did Divas but I don't think the "DC" race will be on my list in the future.


QOTD: Have you ever run any of the Divas races? What did you think of them?


Disclaimer: My registration fee for this race was paid for by Enell as part of their Ambassador Program. I received no other form of monetary compensation. As always, all opinions are my own.