Vacation Recap & Review: All Aboard the Disney Wonder!

Last month, Matthew and I took a spontaneous cruise on the Disney Wonder- the only Disney Cruise Line ship we hadn't been on. We first sailed on the Dream, got engaged on the Magic, and honeymooned on the Fantasy.

While looking for spring break vacation ideas, Matthew stumbled upon a three-night itinerary on the Wonder. We just had to book it! So, three weeks before we would set sail, we booked a trip on the Disney Wonder. With less than a month to plan, we did a lot of research on the ship's restaurants, bars, pools, etc., by reading a ton of blogs and reviews. The Wonder had just come out of dry dock in November (basically it was remodeled and upgraded) and we were so excited to explore a brand new (to us) ship!


Our cruise left Port Canaveral on a Thursday. We took a 6 am flight to Orlando so we could be in the airport, and thus on the bus to Port Canaveral, super early. We got to the port around 10 am and they started letting folks on around 11:30. Unfortunately, we were in boarding group 21 so we had a while to wait before we could board the ship- about another half hour after boarding started.

When we boarded the ship, we were immediately impressed with the new chandelier, designed to mimic the flower in Ariel's hair. We also were struck with how "small" the atrium was. I think because we'd just gotten off the Dream in January, the atrium seemed smaller than it really was. However, it was still incredibly beautiful and the Ariel statue was simply perfect! 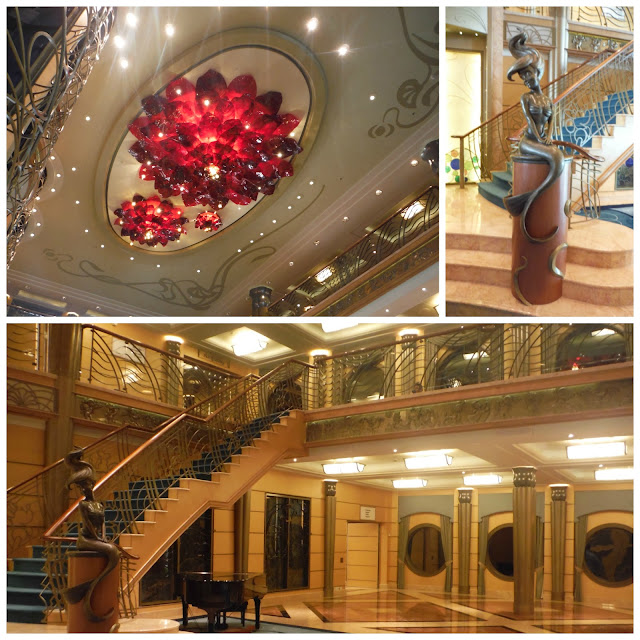 This trip, we had planned on getting a drink at every bar on the ship- seven in all. We made a beeline for Promenade Lounge, grabbed a few mojitos, and took an unofficial tour of the third and fourth decks- all the restaurants, shops, info desks, etc. Then we decided to skip our traditional embarkation day lunch at Cabanas, the buffet on deck nine, and opted for a sit-down meal in Triton's.


The rest of the afternoon was spent enjoying our room, lounging at the pool, and touring the ship. We were so impressed with so many things on this ship, including the adult-only area, "After Hours." Featuring a gorgeous nightclub, "Azure," a meticulously-themed bar, "Cadillac Lounge," and a proper English pub, "Crown & Fin." To say these spaces were gorgeous is an understatement.

This trip, we chose a different type of room to stay in- a Navigator's Veranda. Typically, we get a room with a traditional veranda/balcony. The Navigator's Veranda is a little different in that it's almost like a screened-in porch without the screen. It's hard to describe but hopefully the pictures below will help illustrate it. We really liked this style of room and will probably book this again- especially since it saved us some money as it is less expensive than a traditional veranda.


Our first night on the ship included meeting our table mates for dinner in Triton's (three other childless couples) and checking out a fantastic singer in Cadillac Lounge. We really loved the options for adult-only entertainment on the ship- there was trivia, singers/piano players, game shows, and so much more. Anyone that thinks Disney cruises are just for kids needs to come on vacation with us 😄

The itinerary for this trip was embarkation day, day at sea, Castaway Cay, then back to Port Canaveral for debarkation.

Our sea day started with complimentary room service: coffee, fruit, yogurt. Then we went for a run on the "jogging track" on deck four. I got to try out my new Altra Torins (which I LOVE!) while getting in about 2.5 miles.

After our workout, we headed back to Triton's for a sit-down breakfast. On Disney ships, there are always two options for each meal; Cabanas buffet and a traditional restaurant. This trip we definitely took advantage of the sit-down meals more often than we usually do.

Spending much of our day at sea at the adult-only pool was incredibly relaxing. We grabbed another set of drinks from Signals, the pool bar, and explored the upper decks of the ship. One of the cool things about the Wonder is that Cove Cafe (coffee shop near the pool) is actually on two levels and features some beautiful panoramic views of the ocean.

We booked a Mixology class for the afternoon and got to enjoy five hand-crafted drinks with Ivan, the Cadillac Lounge head bartender. We absolutely love the tastings and mixology classes offered on Disney cruises. Not only do we learn a ton about the history of the drinks we're making, but we also typically meet some cool people.

Our second night of the cruise included seeing "Disney Dreams- An Enchanted Classic," playing a fun round of trivia in Crown & Fin, eating dinner at Animator's Palate, and watching an incredibly awkward game show in Azure. Well, the game show wasn't awkward, but there was one couple playing the game that had broken up years earlier and were trying to rekindle their relationship with a trip on the Disney Wonder. It was so uncomfortable but still funny. I bet those two had some awkward conversations afterward.


Our last day on this cruise was our favorite: Castaway Cay! We started the day early with room service as we got ready for the Castaway Cay 5k. After enjoying coffee on our Navigator's Verandah (this is the classification of the stateroom we were in- basically, it's a type of balcony room), we headed down to Azure to get our bibs and get in line to disembark the ship. I decided to dress as my favorite Disney character for this race. It just so happened that she had her own statue in the atrium. 😊

We got off the ship and walked the half mile to the start line of the race. The weather was perfect- we knew it would be a great beach day once we finished the race. We ran using 30:30 second intervals and finished the race in about 36 minutes, roughly 12 minute miles.

After the 5k, we made our way up to the adult beach where I did a yoga class and Matthew napped in a hammock. For real, can we just do this every weekend?!

We hung around the beach until lunch. Then the clouds started rolling in... and in a matter of 20 minutes, it was pouring down rain! So much for our perfect beach day! We headed back towards the ship, stopping at the "Conched Out" bar to get a drink and wait out the rain. Eventually, the rain did stop, though it felt like the temperature dropped 20 degrees. We spent the rest of the afternoon snorkeling and relaxing in hammocks.

That night, we got to see "Frozen,  A Musical Spectacular," which was incredible, and then ate at Tiana's Place, the newest restaurant on the ship. As you might know, I am a huge fan of Princess Tiana. She is my absolute favorite Disney Princess- I trained for my first half and first full marathons listening to "Almost There" and "Dig a Little Deeper" on repeat. You can imagine how damn excited I was to actually be eating in the legit, real-life Tiana's Place.

Not only is the level of detail exquisite (lily-pad trivets, frogs on the dinner plates), but the food is damn good! From the sausage fritters and shrimp and grits appetizers to the cajun spiced sea bass to Tiana's "man-catching beignets," everything was amazing. I even ordered a Purple Haze beer- brewed by Abita Springs in New Orleans. I had authentic New Orleans meals and authentic New Orleans beer in Tiana's restaurant. It was like I was inside the "Princess and a Frog" movie! The desert menu even had light-up fireflies on the outside cover. Light-up fireflies!


But the absolute best part of Tiana's Place is Tiana herself. She personally came around to every table during dinner and said hello/posed for pictures. I might have almost cried when she came to us. After dinner, Tiana and Louis and the Crawfish Crooners- the brass band playing throughout dinner- actually lead us on a second line/limbo line through the restaurant. It was so magical!


After our super-fun dinner at Tiana's, Matthew and I spent our last night on the Disney Wonder in the adult pool, just hanging out and soaking in the last few hours we had on board.


Overall, this was a fabulous trip and we absolutely adored the Disney Wonder. The upgrades they made are simply stunning and in some ways, this ship feels brand new. While we didn't experience them, we heard that the kid's clubs areas had also been refurbished and received significant upgrades.

This trip came at the perfect time for both of us- we've both had extremely busy semesters at work and have been under a great deal of stress. It was awesome to get on board the ship, turn off our phones, and just hang out with each other (and Mickey!) for a few days.

Will we sail on the Wonder again? Most definitely! I don't know when, but we'll definitely be back on this ship in the future!