For 2019, Matthew and I each chose one race to run during the weekend. I chose the full, he chose the half. So a few Saturdays ago, we woke up at o'dark thirty and headed to Epcot for the start of the 2019 WDW Half Marathon.

We met up at the usual spot with our ohana (Jeff, Katherine, and Nathan) who were all doing the Dopey Challenge- in fact, they are all PERFECT FREAKING DOPEYS! How amazing are they?

After we chatted for a while and planned where I would see everybody on the course, the runners headed back to the corrals and I headed for the monorail... with a quick pit stop for a coffee and a breakfast sandwich on the way. 😉

I walked towards the front of the park and got on the monorail for the Ticket and Transportation Center (TTC). This way, I would be able to see Matthew at mile 3.9 and then jump on the monorail to the Grand Floridian and see him again at mile 7.2.

When I got to the TTC, it was pretty empty and I was able to pick out my spot at the very end of the TTC, right as the runners are leaving and headed back onto the highway. I started chatting with a very nice young man [oh God, does that make me an old lady now?!] who is a sophomore at UCF. His mom and sister-in-law were running the half so we made casual conversation for about 30 minutes before the first runners came through. I didn't catch his name but I did catch a picture of his awesome sign: 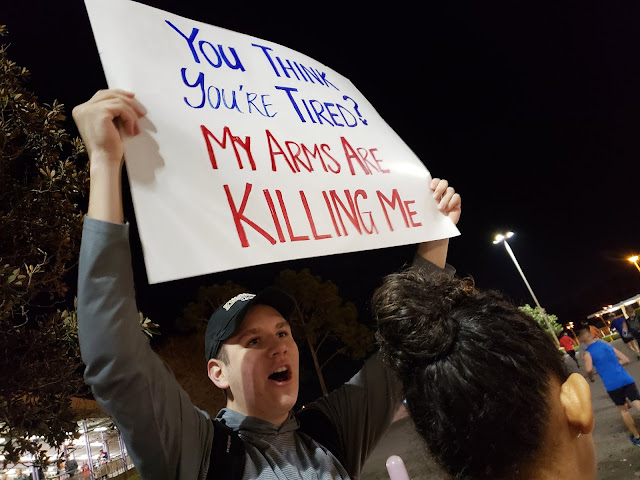 Matthew was running with his phone so we had been communicating during the start and the first few miles. He texted me when he was at mile 3 so I knew when to start looking for him. While I waited for him, I got to see Nathan and Katharine and our friend, Justin.


I had a supply of clementines, beef jerky, and crackers available for Matthew and at mile 3.9, he was requesting clementines. So I peeled a baby orange and got it ready for him as he headed towards me with Jeff- they were running the half together.

Matthew texted me at mile 7 so I knew to when to start looking for him. I had more oranges ready for him as he was just about halfway to the finish.

After seeing them off, I headed back to the monorail to get to Epcot to meet them somewhere between miles 11 and 12. We didn't have a defined meeting spot because I wasn't sure exactly where I'd be able to get to by the time I got back to the park.

On the monorail, it was very cool to see the sunrise over the Grand Floridian and then see the runners on the highways around Walt Disney World. Having never spectated the half before, it was a pretty awesome experience to watch the race from above.

When I got to Epcot, I headed over to the park exit near where the buses park. I texted Matthew to let him know where I was. I had gotten there just in time to see him one last time before the finish.

After seeing him start his victory lap of the park, I headed over to the family reunion area near the finish. We had a predetermined meeting place right outside of bag check. When I got there Nathan and Katherine were already waiting and together we waited for Jeff and Matthew.

Finally, we saw Matthew and Jeff come through bag check and got to congratulate our finishers! After sitting for a while, we headed into Epcot to enjoy a lap around World Showcase before going back to our resort to rest.

While we were in Epcot, the race was actually still going on, so we got to cheer on the last finishers. We also stopped at Starbucks and ran into these two guys, still running, who took a break to grab a frappuccino on their way to the finish. 😂

And in true Disney wall fashion, Matthew took a picture with the infamous bubblegum wall. 😏

All in all, it was a successful day of running and spectating. Watching other people run sounds like the most boring thing in the world, but it is actually really inspiring. Watching Matthew complete his half marathon made me so proud- he's a freaking rock star.

With the half marathon complete, Matthew and I packed our bags for the marathon and tried to get some rest. We had another long day of running and spectating in front of us!

Have you ever spectated a Disney race?