On Sunday June 15th, Matthew and I competed in the Storm the Beach obstacle race in Nags Head, North Carolina. Since we are down here vacationing for a week, we decided to sign up for the five mile option. This race offered a .75, 3, or 5 mile option. Naturally, we had to pick the longest distance :-)

Sunday was a beautiful day for a race: mid-60's, partly sunny, with a slight breeze coming in off the ocean. The race started at 7:50 am and we arrived around 6:30 am to Jeanette's Pier. We had come in early because we still needed to pick up our packets- there had been a packet pick-up the night before but since we were staying about an hour away from the race, we didn't want to waste precious vacation time running all the way down the night before. Matthew emailed the race directors last week to ask about race-day packet pick-up because it wasn't clear on their website or emails if that would be an option. Then I called them, facebooked them, and tweeted at them- no answer. This race gets an "F" in pre-race communication. Why have social media accounts if you don't respond at least daily to them? On the facebook event page, some other participants had shared that there would be race-day packet pick-up. So Sunday morning, we drove down with hopes that we'd be able to race.

Everything turned out to be fine. They were even taking race-day registrations. We got our bibs, t-shirts, and swag bags- which were awesome, by the way. When we got our bibs, I saw that Matthew had put a special nickname on my bib- "Stinky." He's just hilarious :-)


After getting our bibs on and making sure our shoelaces were double-knotted, we lined up at the start. There weren't many people doing the five mile option- maybe 100 total. I'd soon find out why. After only a few minute delay, we were off! And I felt like I was running through peanut butter- for real, dry sand is just awful to run in. We trotted along, quickly becoming one of the last few people in our group. We quickly went through the first obstacles with no issues- just some things to crawl under/over- though I must say that army crawling through sand is pretty painful on knees and elbows.

Since we were doing an obstacle course, we didn't have a camera with us so I don't have any pictures of us on the course. We did get an email with the official pictures but there were only 17 of us- and all but two were of our backsides as we were crawling through a water/sand pit. There were over 20 obstacles but we only had pictures at one of them. Kind of a bummer especially since we were considering buying some of the pictures. Again, I'm giving the race an "F" in photography.

The rest of the course was challenging, mainly because of the sand. We did have to wade into the ocean chest-deep, drag a tire about 100 feet, flip a tire end-over-end, raise sand bags, crawl under surfboards, crawl through tubes- which was SUPER painful because of the sand grinding into your knees- in addition to running in soft sand. We tried to stay on the packed sand as much as possible but that created another problem- lots and lots of sand in our shoes making them super uncomfortable and heavy.


With about a quarter of a mile left, we took our shoes off and ran the rest of the way barefoot. The sand had become too much for us. One of the last obstacles, "The Fence Climb," scared the crap out of me. It was a series of three "fences" to climb of various heights. The tallest was about 15 feet. After the race, I was able to take a picture of it- it may not look like much but when you're at the top of it, it's a little nerve-racking.


We finished the race, got our super cool medals, and then headed to the car to clean up a bit. Then we went back to enjoy the post-race food and beer. I have to say, there was an incredible amount of food available to us- hot dogs, chips, cookies, granola bars, bananas, PB & J's, fruit, etc. There was also a local brewery giving out four (4!!) beers a piece to runners. And what was super cool was that our ages were already printed on our bibs- no need to show ID. "A+" for the race in the post-race department. Another cool thing- they listed our emergency contact person and phone number on the front of our bibs. Helpful and functional :-)


I also have to mention that the support during this race was incredible. I've never seen other runners so vocally supportive- every time we were passed (which was a lot- ha!), the runner would say "good job," or "looking good," or "great job." I can't say how much I appreciated it. It was a tough course and the extra encouragement went a long way in getting us to the finish line.

The volunteers were really awesome as well. There was a very cool woman dressed as a pirate walking around post-race handing out food- she was an absolute riot. All the race personnel we interacted with were phenomenal. Another "A" for volunteers and race personnel.

After the race, we were able to explore our swag bag and were pleasantly surprised. We got a cool race t-shirt, a mini beer pint, sunglasses, a key chain, and of course- a really nice medal. Another "A" for race swag. 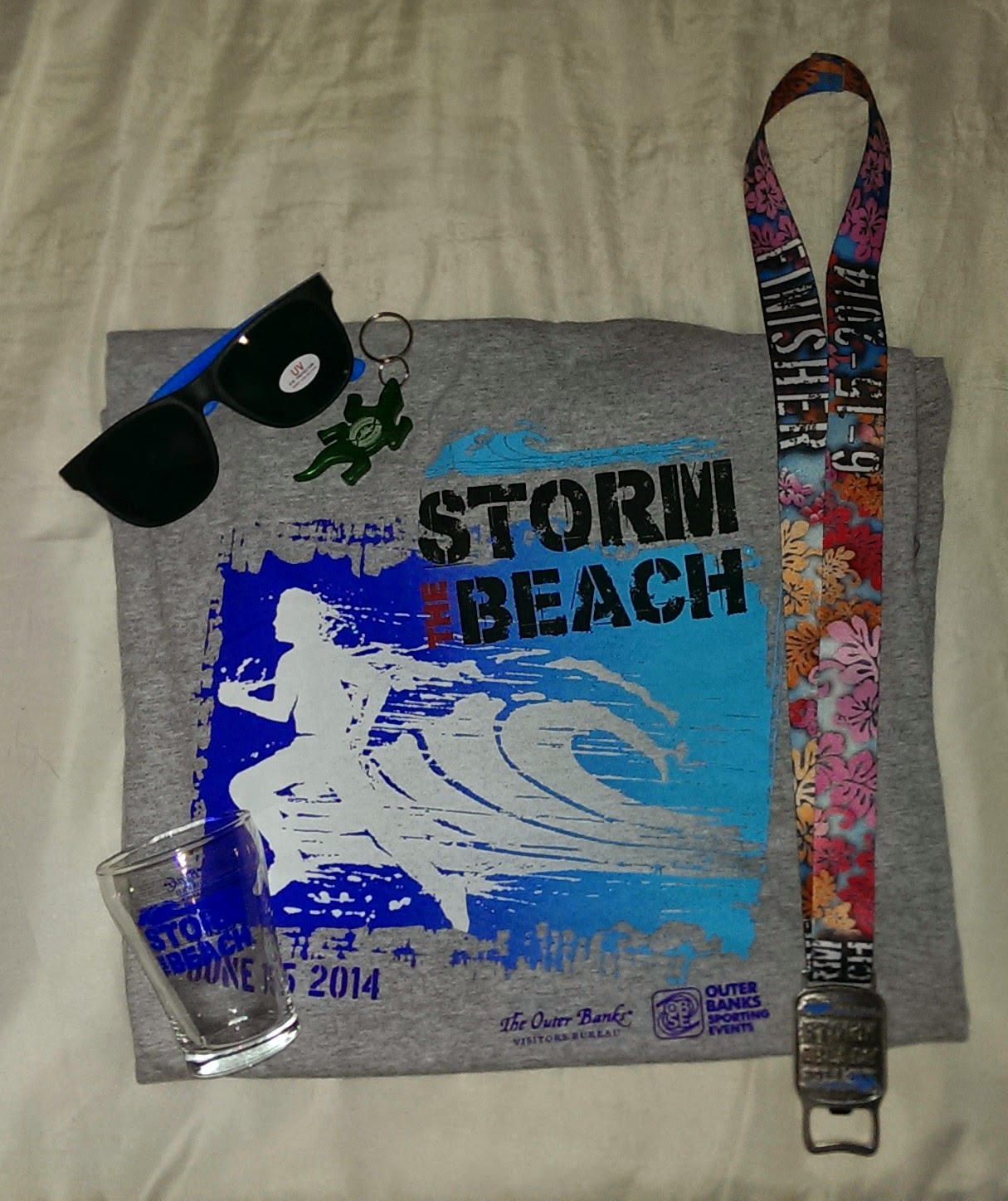 All in all, it was a fun and unique race. How often can you run five miles on the beach, including tons of fun obstacles including getting in the ocean? It was a first time for us and I'm sure we'll be back next year if it fits in our schedule.

QOTD: What's the most unique race you've ever done? What made it unique?
Posted by Sarah S. at 7:30 AM