Last month, I ran the Pittsburgh Half Marathon for the third time in a row- well, as long as you count running the full last year as running the half too! My first experience with Pittsburgh Marathon weekend was in 2014; I fell in love with the city, the people, and this race so Matthew and I have been traveling west every year to do it.

As you'll remember, we ran the 5k on Saturday morning. That afternoon, our running Ohana (Coach Jeff, Mandy, Lauren, Gloria, Chelsea, Lauren B., Kelsey, Kathleen, and some others) had dinner at Chelsea's house and talked about our race strategies. It would be Lauren's first full marathon (you can read about it here) so much of our conversation centered around last-minute tips for what was looking like a rainy, stormy race day.

After chatting for a while- and eating tons of food- Gloria, Matthew and I headed back to Steff and Joe's. Luckily for us, while Steff and Joe were out of town at Flying Pig race weekend, they let us stay at their house so we didn't have to get a hotel for the weekend- thanks, friends!

We laid out our clothes, discussed what time we'd be leaving in the morning, and then tried to get some sleep. Matthew and I had talked about what race he was going to run. He'd signed up for the marathon but because life gets in the way (hello, wedding planning), he wasn't trained the way he wanted to be. The great thing about Pittsburgh is that the full and half follow the same course until mile 11. So we planned to run miles 1-11 together and then depending on how he felt, Matthew would turn off to run 16 more miles and I'd head down to the finish. But, like most things, this didn't work out quite like we'd thought.


Race morning, we drove into the city and parked fairly easily. Thankfully, Gloria is a Pittsburgh expert and helped us navigate the city streets and find a great parking garage. We headed to the hotel that had the VIP area (some of our running Ohana are fancy-pants and got the VIP package :-) ) and hung out in the lobby with some of our friends. The weather forecast was looking horrible- rain and storms off and on all day. As we headed out to the corrals, it was cloudy and humid but wasn't raining yet. Gloria, Matthew and I were all starting in the last corral (D) and though it was a bit of a cluster getting there- the road we were all walking on was somehow STILL OPEN to traffic (YIKES!)- we had no problem checking our bags and then finding a place to stand in the crowd. And then we found Kelsey! I love finding friends in the corral :-)

As we were waiting to start, it started raining. And it was one of those cold, crappy rains. So Matthew and I huddled together as we shuffled towards the start line. Since my toe was still a little cranky (ingrown toenail issues), we were just going to take the race nice and slow. Our first few miles averaged around 11:30- 12 minute miles.

Around mile 4, we ran into Karen, our friend Brandi's mom. She asked us what intervals we were doing (30:30) and then asked if she could run with us for a while. This was Karen's ninth half marathon but only her second without Brandi by her side- Brandi was running for time at Pittsburgh so they were racing separately. So our running duo became a trio and we kept trucking along, albeit a little slower than we'd thought. Karen was struggling a little bit with the humidity and without having her usual running partner by her side.

A few miles later, Matthew let me know that he'd decided he wasn't going to turn off for the full. He said, "This was meant to be. We were meant to help Karen get to the finish line." So that became our new goal- get Karen to the finish line of her very first Pittsburgh half marathon. Karen is actually originally from Pittsburgh but now resides in Georgia. When we got to the bridge that is opposite "the point" around mile six, Momma K (Karen) says to us, "I've been dreaming of this moment!" I might have cried a little :-)


I absolutely LOVED running with my veil and the countdown on my back- "20 days til Mrs.!" Runners and spectators all along the course shouted out words of encouragement and even some marriage advice. My favorite was when another female runner shouted out to me, "You know what the best part of a wedding is?" I said, "What?" She said, "The marriage that comes after." I can't even type it without tearing up! It was so much fun- I'm even more convinced runners (and spectators) are the best people on the planet.

The miles ticked by and we tried to keep each other distracted from the rising heat and humidity. It had stopped raining halfway through the race but was very muggy. Gross! When we got to mile 10, Matthew insisted that we do a dance. It was pretty damn hilarious.


If you've ever run this course, then you know that just past the last bridge at mile 11, you begin a grueling, mile-long uphill. It completely sucks the energy out of you at a time when you're already pretty tired and your feet/legs are killing you. Well, this year, some heavenly spectator decided to station herself on the bridge with a huge sign that said "You've come this far! Now get the F up the hill!" Which is pretty funny on it's own but then, just past the sign, there were two more people handing out literal "F's" on small pieces of paper for runners to literally carry up the hill. Hands down, the most creative sign I've ever seen on a race course! 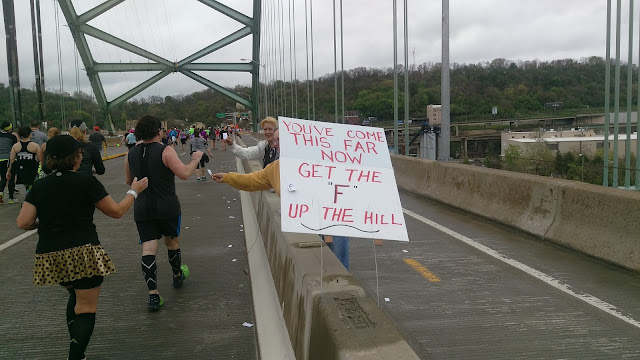 After conquering the monster hill, we began our descent to the finish line. Just a few miles later, we crossed the finish line in three hours and some change (3:11) and officially earned the title "Runners of Steel." We grabbed some finisher's pictures and then headed through the chute to get our food. However, there was barely anything left. The same thing happened last year after the marathon- somehow this race ALWAYS runs out of food for the back of the pack. In fact, at mile nine, there was supposed to be Gu and some fruit chews but when we got there, there was nothing. Honestly, it is such crap- we finished well within the four-hour time limit and should have been entitled to the same food and course support as the first finishers. It is irritating to say the least. Anyway, we headed towards the finishers festival in Point Park to grab our bags, Steel Challenge medals, free beer, and then went back to the finish line to cheer for our friends running the full marathon. 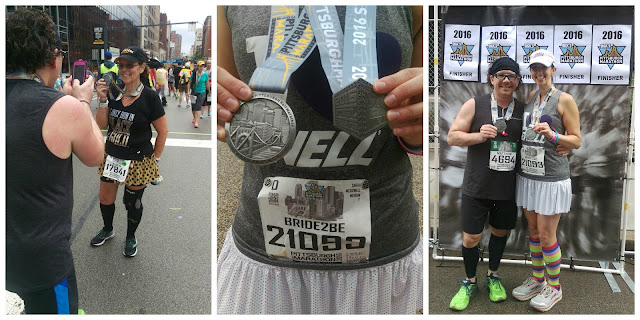 After all our friends had finished and we were able to say our goodbyes, we walked with Coach Jeff back to the finisher's festival so he could pick up his bag. While there, we got to take some other cool pictures with some props that the Pittsburgh Marathon folks provided. This was new this year and I have to say, it was a pretty cool improvement.


All in all, it was another successful Pittsburgh Marathon Weekend. Will we be back in 2017? Only time will tell. There are some other races that we are thinking about next spring and we may have to make some tough decisions regarding how often we'll be able to travel for out-of-town races- especially since we are headed back to Walt Disney World for Marathon Weekend 2017; Dopey for Matthew, full Marathon for me. We'll just have to wait and see if a return to Pittsburgh is in our future :-)

What's the best sign you've seen on a race course?