As hard as it is for me to believe, my second year of being an ENELL ambassador is coming to an end. Representing a company (honestly, it's so much more than just a company) that I truly believe in has been such a rewarding and wonderful experience and I'm so thankful I had the opportunity again in 2016.

Absolutely humbled to be selected to represent @enellsportsbras for 2016. I am so excited to work with a company who's core mission is to support and empower women by providing them with products that allow them to reach their fitness goals. This bra is the reason I was finally able to run, to lose weight, and feel confident while working out. 2016 is going to be amazing! #Enell #teamenell #runchat #2016
A photo posted by Sarah (@sparklyrunner) on Dec 23, 2015 at 6:20pm PST

As part of the ENELL Race Team, they sent me some new ENELL gear to run in and sponsored three of my races. I've been wearing ENELL for about six years and have been so impressed with the gorgeous colors they've come out with in the last year: Dazzling Blue, Biscay Bay, and Rock It Red. As a well-endowed runner who cannot wear the "fun" bras from other companies, it is awesome to be able to sport a colorful, fun ENELL bra under my running tanks- somehow, the run just feels better if it's color-coordinated! 😁 And that Dazzling Blue was the perfect choice for my wedding day 5k as my "something blue!"


Besides the cool colors, ENELL also supports me like no other piece of clothing/running equipment. The first thing I pack for any trip is my ENELL. Basically, that's the only thing I can't replace. Running clothes? Sure. Shoes? Absolutely. A sports bra? No freaking way. This year, my ENELL came with me to Cape May, NJ, the Bahamas, Ireland- quite a lot of travel for a bra!

Running races as an ENELL ambassador gave me the opportunity to raise awareness of this brand among other female runners. I can't tell you how many times I've chatted with other well-endowed folks who hadn't heard of ENELL and were surprised to know that a bra existed specifically for their and their girls' support needs.


But what I love the most about ENELL, is the confidence this brand gave me to even think about becoming a runner. With the right support, you can do anything. And believe me, when I put on my ENELL, I truly feel #unshakable.

#IHaveARunnersBody ...but for years, I thought the exact opposite. Continued below ⤵ ✨✨✨✨✨✨✨✨✨ ✨✨✨✨✨ Growing up overweight and well-endowed made it damn near impossible to think of myself as athletic, let alone a runner. In gym class, classmates would joke, "Hey Sarah, don't give yourself a black eye from jumping jacks!" I know they intended to be funny, but their comments hurt. My own negative thoughts about my body coupled with "jokes" from others pretty much sealed the deal for years and years of self-hatred and self-sabatoge. I hated my body and used food to both comfort and punish myself. But then I watched Matthew complete the @oddyssey_half in May 2011 and I saw so many people running that didn't fit my idea of what a "runner" looked like. And I thought, if they can do it, maybe I can do it too. So I started running. And I found @enellsportsbras, which absolutely changed what I thought about being well-endowed and running. The running led to thinking about my body differently; positively. That led to fueling my body better, which led to even more positive thoughts about my body. What's amazing about this is that none of these positive thoughts have to do with what I weigh or how fast I run. This body has allowed me to run two full marathons, 20 half marathons, and countless 5 and 10Ks. I'm damn proud of this runner's body! Five years of running later, #IHaveARunnersBody. But as it turns out, I had one all along. Change your mind, change your life. 💖💖💖 #bodypositivity #irunthisbody #werunsocial #Enell #support #womensrunningcommunity #effyourbeautystandards #runchat #teamenell #flawsandall
A photo posted by Sarah (@sparklyrunner) on Mar 31, 2016 at 6:18pm PDT

Even though my official ENELL Race Team ambassadorship is coming to an end, don't expect my love for this brand to go anywhere. You'll still be able to find me posting flat runner pictures on instagram, color-coordinating running outfits/costumes, and chasing down dreams, with my ENELL in tow. Thank you, ENELL, for all the literal and figurative support over the last year- it's been an honor to be part of the team! ❤ 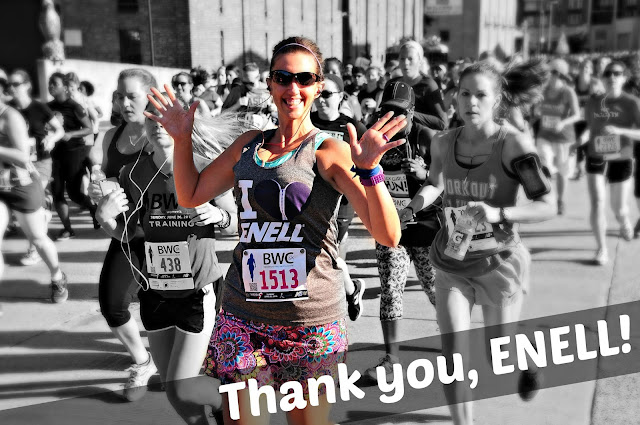