Yesterday, we got to participate in the Jingle Bell Walk/Run for Arthritis 5k in Harrisburg, PA. We've done this race before but not in this location. In fact, this was our first race in Harrisburg, the closest city to where we live. This event offered something for everyone- kid's races, a 5k walk/run, and you could even bring your dog along the course with you!

All weekend there had been the threat of serious weather. Another local 5k actually canceled their race for Saturday fearing it would be snowed out. With the snow slated to start falling around 5 am Saturday and with our race having a 10 am start, we kept a close eye on the website to make sure we didn't drive nearly an hour to a canceled race.

At 8 am on Saturday, there was no snow and no cancelation notice so we got in the car and headed north to the race. When we got there, the party had already started. There were approximately 2,000 people all gathered in a business park in various heated tents. There was a DJ, awesome pre-race food, mascots/characters, and a general fun atmosphere. It was like being at a Disney race! Except for the freezing temperatures and wind- it was probably close to 30 at the start! 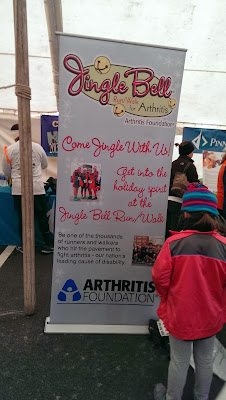 At about 9:45, we lined up to start. And just at that moment, it started to flurry. It was actually very pretty to run while the snow was just starting to fall. At 10 am, without much fanfare, we were off! The race itself was within a business park and just a little out on the main highway. We did two loops- both of which started uphill.

My plan for this race was to keep my 1:1 intervals, which I did for the first mile. Then I switched to 2:1 and tried to keep under an 11 minute/mile pace. The main goal was to finish healthy. Dopey is only a few short weeks away- I don't need to try and PR a 5k when I have almost 48 miles on the calendar for next week :-) 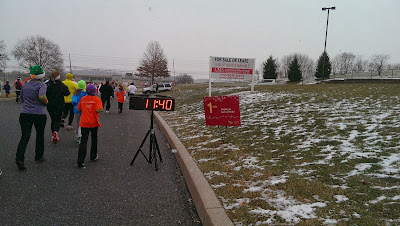 The best part of the course was the switchback where you could see the runners in front of you. I actually was able to catch Matthew mid-run!
﻿


Because this was such a big race, there was a great deal of crowd support. This was also a race for "Girls on the Run." This is a non-profit organization that works with girls from third through eighth grade promoting health and self-esteem through running. There were hundreds of girls running with their coaches. It was really inspirational to see.


After rounding the corner of the second loop, I knew I was just .1 away from the finish. I picked up the pace and tried to finish this race in under 34:00. My official time? 33:58.9. I'll take it. Matthew finished in an amazing 26:27.2. All our training is definitely paying off and making him super speedy!
﻿

All in all, this race was absolutely worth the $30 entry fee. Cute long-sleeved shirts, lots of pre-race food/entertainment, and all proceeds support a great cause. We will definitely do this one again next year. Not a bad way to round out the 2013 racing season. Just one more race (New Year's Day Resolution Run 5k) before we cap off all our training at the inaugural Dopey Challenge in Walt Disney World. Eek! :-)

How are your last races/training runs of 2013 shaping up?