After getting a good rest on Friday night, Matthew and I woke up at 2:30 on Saturday morning to head to the half marathon. We were on one of the first buses over to Epcot; Matthew had all his gear, I was equipped with multiple spectator signs and my winter coat. Yes, it was another freezing and windy morning in central Florida.

After meeting up with our peeps- and getting to see Matt aka Hokeyboy and his wife Kim- Matthew and I said our goodbyes as he headed back to the corrals. Luckily, I've spectated races at Disney before so I knew roughly when I needed to head over to the monorail to get a good spot at the Magic Kingdom. One of the benefits of not running this race was that I was able to see all of my running friends- those that came early and those that were rushing in at the last minute. I was so happy to finally meet Kathleen and Lee in person- we've been twitter friends for a long time and I've loved following both of their journeys to Dopey. I also got to meet Natalie and Jimmy, quite possibly the most good-looking and sweetest couple I've ever met. Seriously- they're awesome. And we met up with Andrea- whom I first met in-person last year on marathon morning, on the bus to the race start. Heather and her crazy awesome mother were there too- we have the best friends around.


Around five, I headed toward the monorail. The first corral would start at 5:30 and the first runner would get to MK around six. The wheelchairs would be there within 15 minutes of the start. So I knew I had to hustle if I wanted a good spot.

Back in the day, before I was a distance runner, I would watch Matthew run these races at Disney. In case you didn't know, I'm a professional spectator :-) I have a spot in MK, just before the runners take a right and turn into Tommorowland, that is just perfect for spectating. Here's why: they block off only half of Main Street, USA for the runners which means that it is incredibly congested during that part. However, when they are about to turn into Tomorrowland, the path widens and swings out to the left, just in front  of the castle. That way, I'm sure to be seen and runners can safely hug the left side and come over to say hi to me without impeding the flow of traffic. But you've got to be there early and you've got to be ready to claim your spot.

A quick ride on the monorail and I was in MK. As I entered the park, I was moved to tears. Full on, sobbing tears. It was beautiful. Seeing the castle lit up, with the huge Christmas tree in the foreground- it was just emotional. I think part of it was sadness that I wasn't able to run. It is still tough watching from the sidelines, longing to be part of the race.


Anyway, I found my spot and quickly got my signs ready. I was tracking multiple friends so I would be ready when they were close to me. I was also texting with Lauren, who was spectating from her resort around mile seven. I missed Coach Jeff and Patrick but did get a quick shot of Nathan as he flew by. I was able to see my friend Donna (who I first met through Instagram and then in person at the Divas VA Race), Mandy (twitter friend who I met in person at the Runner's World Half), Carlee, Krissy, and Megan (all twitter/IG peeps) and I even saw Bart Yasso! I yelled for him and he waved! I'm pretty sure this means we are BFFs now.

As I was cheering, I looked over and there was Kim, Matt's (Hokeyboy) wife! She is probably my spectating idol- she takes phenomenal pictures and captures such cool moments. We chatted for a few minutes and then Matthew texted that he was on his way. He looked GREAT at mile five! We chatted for a minute, I got a few pictures, and then I sent him on his way. I had some time- I was expecting him to run a 2:30- so I stayed for a while and cheered for more runners. Then I meandered down Main Street and back to the monorail to Epcot so I could see Matthew finish.

As I'm getting off the monorail, Matthew called me- he was at mile 13 already! Natalie and Jimmy had caught up to him at mile eight and paced him to the finish. I was so upset- there was no way I'd make it in time to see him finish. And the winner for the worst girlfriend/spectator of the year goes to... Ugh.

Luckily, Matthew was totally cool with it and met me right outside the bag check area. He had actually finished somewhere around 2:16, a full 15 minutes before I was expecting him! He flew through those last few miles! As we were grabbing some pictures and talking about how he totally ROCKED the half, our friend Justin spotted us and said hello. I cannot express how much we love runDisney events for this reason; we are surrounded by so many friends and so much love.


We headed back to the resort to get cleaned up and relax. While walking around our hotel, we randomly bumped into fellow Enell Ambassador Julie from Run, Walk, Fastpass, Repeat. She was running her first marathon the next day so we had a quick pep talk and a quick picture :-) Dad and Margie headed out to Downtown Disney and Matthew and I took a short nap. I decided to head back to the expo and meet Coach Jeff there. Matthew napped some more :-)


At the expo, Jeff and I walked around, got our feet taped up at the KT Tape booth and ran into Lauren and her husband Mark! We chatted for a while and made plans to meet up the next morning for the marathon. I also bought a great running jacket at One More Mile and got another picture with Jeff Galloway- I just can't resist talking to him when I can; he's such a cool guy.

We left the expo and headed back to our separate resorts. The Ravens game was on at 4:30 and I wanted to make sure I got back in plenty of time to watch it. After laying in the sun with Matthew for a bit when I got back (it FINALLY warmed up!), we went to our room to get ready for the next day and watch the game with Dad and Margie. At halftime, we ran over to the dining hall and grabbed food to go so we could keep watching football. After a frustrating loss, we quickly turned off the tv and started chatting about the next morning. We also showed my dad a slideshow that we made with running pictures and video "good luck" messages from the rest of our family. It was cool. I might have cried. Just a little ;-)

We climbed into bed around nine, nervous with energy for what the next day would hold for Matthew and my Dad. My 58 year old dad was about to be a marathoner. And Matthew was about to be an 8-time marathoner. I was so excited, it took a long time for me to finally fall asleep. I just couldn't wait to see all the Disney magic that would unfold the next day. 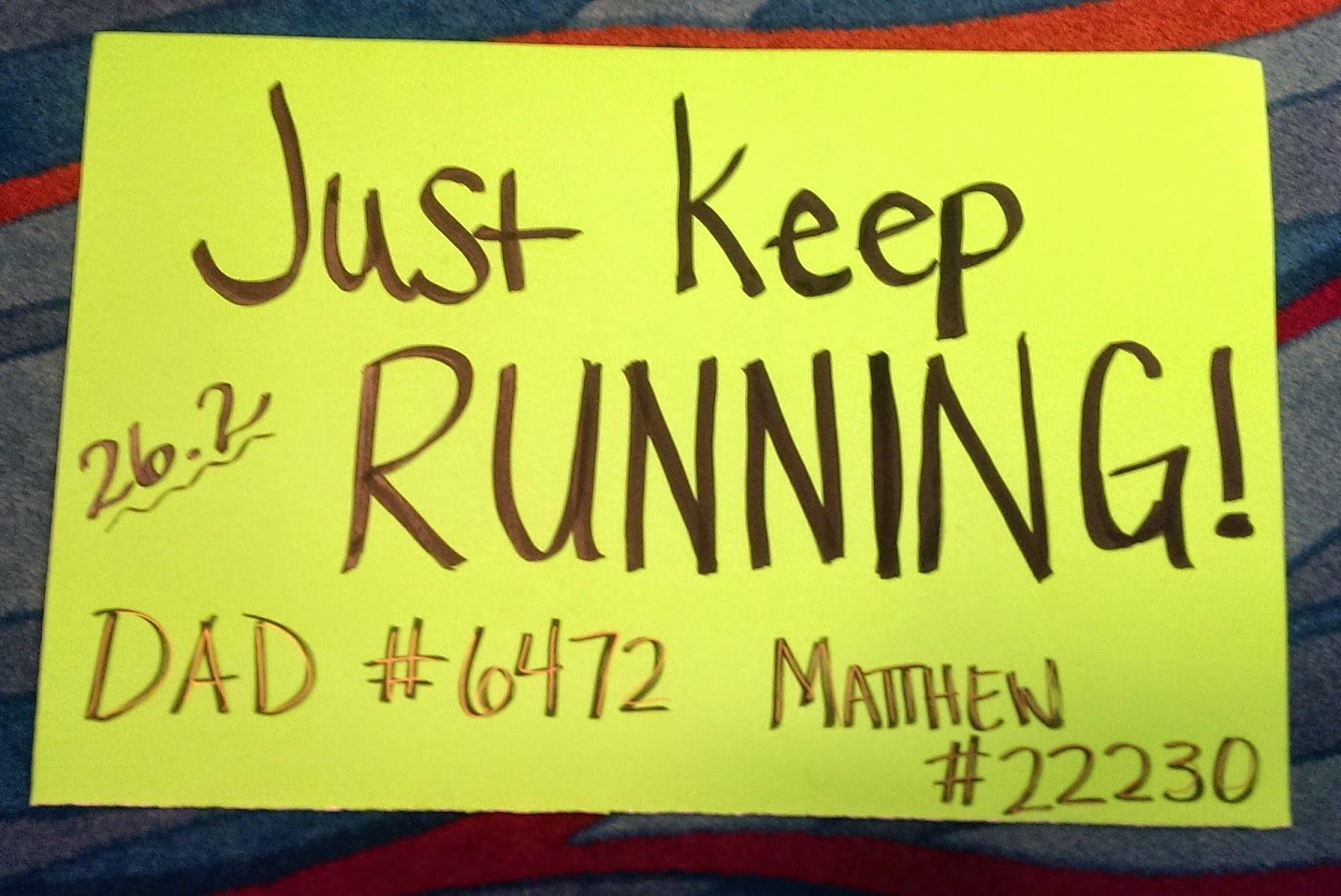