2015 was third year for this event that takes place in my hometown of Bel Air, MD- "Hike for Bear." Traditionally, this event features a family hike but new for this year, they created a 5k trail race that took place about an hour and a half before the race. 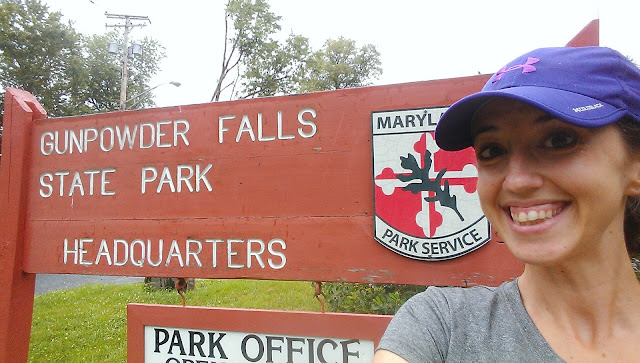 About five minutes before the race start, the organizers gathered us together, all 20 of us, to tell us a little about the course. It was raining so naturally, the course would be muddy and slippery in some sections. They also told us that there would be small orange flags marking turns and every once in a while on the straight sections. I jokingly asked if there was any way we could get lost and they laughed and shook their heads no. Oh, foreshadowing :-)

The race started and we made a big loop through a large field and then headed into the woods. It was so beautiful and so peaceful just running through the trees and along the stream. Because there were so few of us, I quickly fell behind the majority of the runners and felt like I was pretty alone on the course. 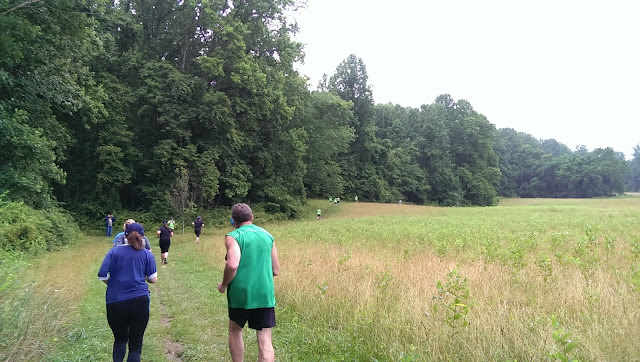 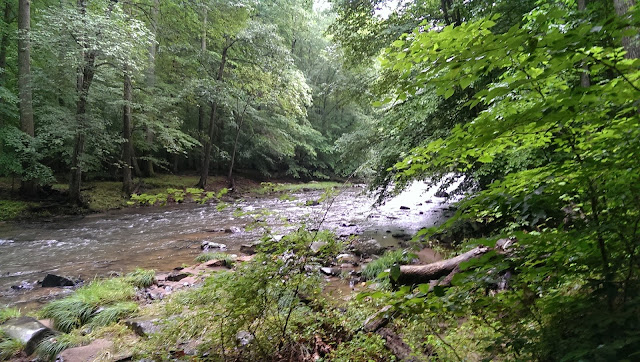 I was just trotting along, enjoying the day, when the trail started to get really narrow. Then I came to a point where a small tree had fallen on the trail and I wasn't sure if I was supposed to keep going or if I'd missed a turn somewhere along the way. Because I was in the back of the pack, I couldn't see anyone in front of me. So I stood there, thinking about what to do next, when some other runners came up behind me. They didn't think we were supposed to follow the trail over the tree- there weren't any footprints in the mud past the tree to indicate that other runners had come through that way.


So as a group, we decided to head back the way we came and try to figure out where we made a wrong turn. There were seven of us in total. As we walked, we couldn't find any turns that we should have  taken and to be honest, we didn't find that many flags telling us where to go. Eventually we figured we would just follow the path back out and head back to the start/finish area.

Then out of the woods comes one of the guys from the timing company. He was doing a loop of the course to make sure we were all ok. We told him we were lost and he told us we were supposed to go OVER the fallen tree. Go figure, right? So, myself and three other runners decided to go back and finish the course; the other three runners went back they way they came.


Finally we made it back out to the big field where we started. Final time was 56:40, 18:17 minutes/mile. Even though I was super muddy and had gotten a little mixed up on the course, it was still a really fun and beautiful trail race.


Have you ever done a trail race?

Have you ever gotten lost during a race?