As you know, I did not run the Akron Marathon Relay a few weeks ago. But, I have a special treat for you today- a recap from Matthew! He has relayed his experience during the half marathon to me so I can share it with all of you. I'll throw in some spectator stories too so you can get the full experience. So, let's dive right in!

Saturday, September 27th started with a group photo in the lobby. The race started at 7 am and we wanted to get everybody corralled and ready to go before then. Nathan and Matthew were running the half; Steff was starting the marathon relay and running legs one and two. After dropping them off at the start, Lauren, Mark (Lauren's husband), Jeff, Chelsea and I headed to the VIP area to watch the start.

Matthew:
After they dropped us off, I tried to get into my corral- C. It was a confusing set-up and I eventually found my way to the port-a-potties and then settled into corral B. I couldn't get into corral C.

The race started and I noticed that the volunteers holding the rope at the front of each corral weren't walking the group forward so people just started running a few blocks before the start. It was peculiar.

Sarah:
Watching the race from the VIP area was AMAZING! It was elevated so we could see the entire street. Lauren was hilarious- she looked the like the mayor waving to people. It was adorable.


Matthew:
The first few miles of the race were pretty cool- we ran an out-and-back course over two bridges and there were tons of spectators out lining the streets. There was fantastic signage for the different races. Every few miles, there would be signs directing you to the marathon, half marathon, or relay course. And then about a half mile later, a sign would confirm what course you were on. The relay exchange areas were well-marked and well-organized. About a quarter of a mile before each water/medical station, there was a sign letting runners know it was coming up.

Miles 4-7 went through the city of Akron, neighborhoods, and business areas. I knew I was keeping a great pace. My goal for this race was sub 2:05 and up to this point, I knew I was doing exactly what I needed to. I ran straight for 6.5 miles; after that, I walked for one minute at every mile marker. As I approached the second relay exchange point around mile 9, I knew to look for Jeff. I was able to see him and say a quick hello. I also tried to stay on the blue line- the line painted on the course that was the shortest route of the race- it ran along the tangents.

Sarah:
After the start, Chelsea and Lauren headed back to the hotel and Jeff headed to his relay exchange point. Mark and I, after consulting the course map, tried to scope out some places to watch our runners. We settled into a location at mile three. We were able to see Nathan but couldn't find the others. Eventually, we found a Starbucks and we grabbed breakfast. I had planned on seeing Matthew at mile 10 but I missed him... again! I forgot how frustrating and stressful it is to try and find your runner in a sea of people!

Mark and I made our way down to about mile 12.5 and decided to stay there to see Nathan and Matthew finish. Nathan zoomed past us finishing in 1:30 something and after he finished, he walked back to us to cheer for Matthew. Once we saw him, I knew he was going to SHATTER 2:05 :-) He passed us and we made our way back into the stadium to the finish- I had my bib on the scooter and Mark had a VIP pass so we had no issues getting into the runner's only area.

Matthew:
After mile 9ish, we ran past the start line again and I knew we just had that same out-and-back (minus a block or two) to get to the end of the race. At mile 11, I looked at my watch- 1:42. I felt like I'd break 2:05. From miles 11-12 we ran back over a bridge and towards the stadium. At about mile 12.5, the spectators started lining the streets. As I usually do, I took out one earbud so I could experience the finish. I heard Steff yell out to me and then later saw Sarah, Mark, and Nathan cheering me on.

I ran toward the stadium and then entered under the scoreboard. There was a weird fabric down on the field- it felt like running on a blanket; it was awkward. I crossed the finish line and checked out my time- 2:01:43. Awesome! I grabbed my medal and then went up into the stands to find the team.

That's right, my team carried my scooter and helped me get down STADIUM STEPS to get onto the field. They are amazing :-)

We were able to get right up to the finish line and see Chelsea finish- it was a cool moment. Then Chelsea gave us all our medals and my team gave me the sweetest card. There were some tears :-)

Afterward, we headed back to the hotel to get cleaned up, traveled to Pittsburgh, and spent a good three hours in a Cracker Barrel off the PA Turnpike laughing at inappropriate jokes and offending lots of elderly folks. Fantastic day. 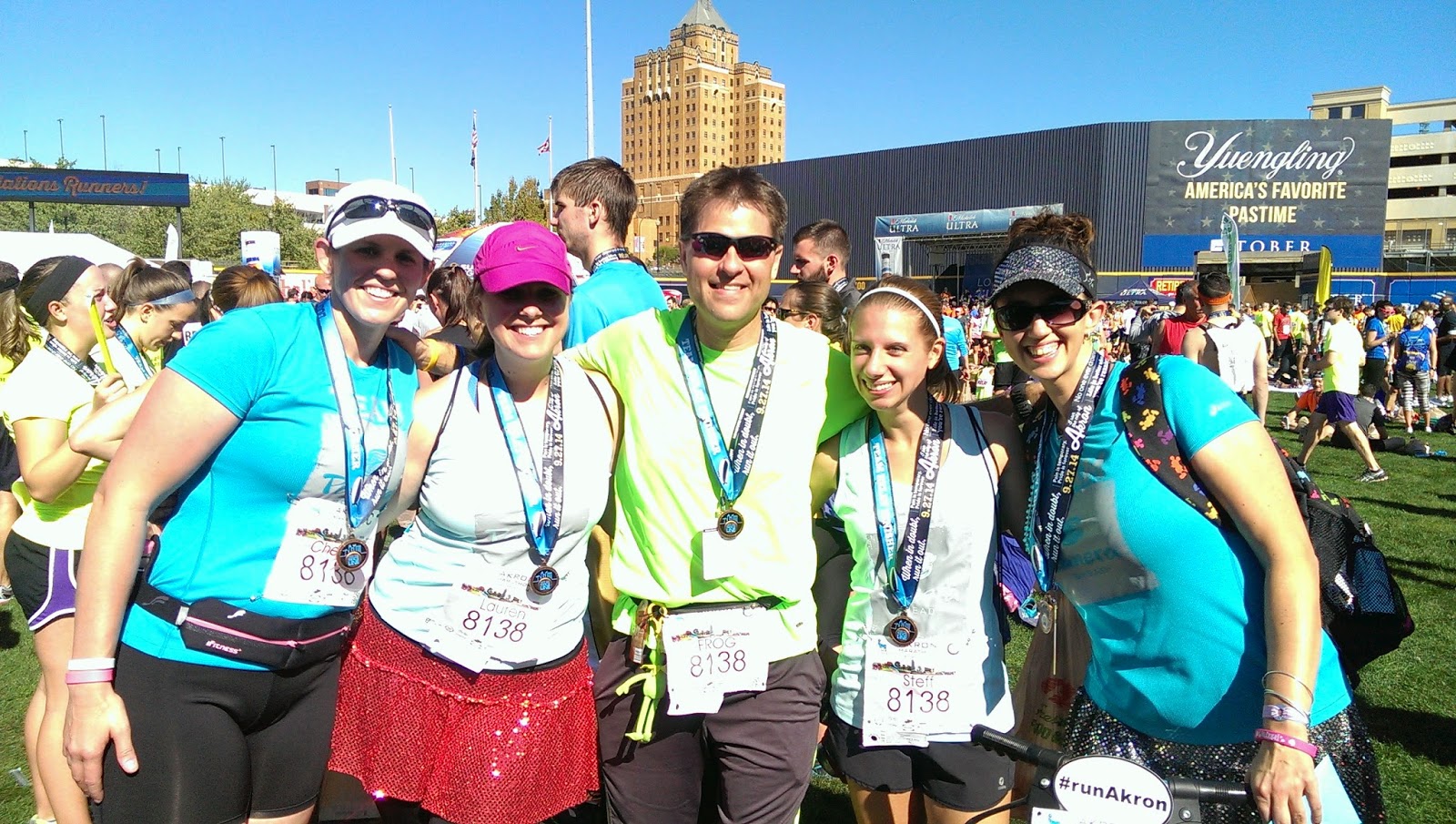 Matthew:
Would I do this race again? Absolutely. It was very well-organized, it was a safe course, a well-supported community race, and I loved everything about the "blue line." If I can talk Sarah into it (yeah, right!), we'll be back in 2015.

Sarah's Final Thoughts:
Seriously, the entire Akron Marathon team did such an impressive job with this event. Big thank you to Andrew and Panera for allowing us to be part of a great race weekend. Since I didn't get to run, I'm pretty sure it's a rule that I have to come back for 2015! Hope to see you there!