For the third year in a row, on the last Sunday in June, I ran the Mid-Atlantic's largest women's only race, the Baltimore Women's Classic. [check out 2014 and 2015's recaps!]

While the things I love about this course- the bling, the price, the atmosphere- stayed the same, there were a few differences. First, I was running this race as a part of the Enell Racing Team so I got to wear my sweet Enell tank and my newest favorite Enell, Biscay Bay. Or as I like to call it, the "Green Goddess."

The second thing that was different about this year's race was that I decided to run this race in memory of a former student intern of mine, Amanda Strous. On June 18, a little over a month before she was to be married, Amanda was murdered in her apartment, most likely by her upstairs neighbor. The night before the race, I decided that I wanted to run with Amanda's name on my back. I felt so incredibly helpless (and still do, to be honest) and this felt like something small I could do to honor her and share her name with others.


The morning of the race, Matthew and I arrived to downtown Baltimore about an hour before the start. We'd pre-purchased parking (thank you, Parking Panda!) and then walked about a half mile to get the to pre-race expo/festival. My dad had already picked up my packet earlier in the week so we just walked around to see the different vendors and what they had for sale. I also might have eaten some watermelon :-) 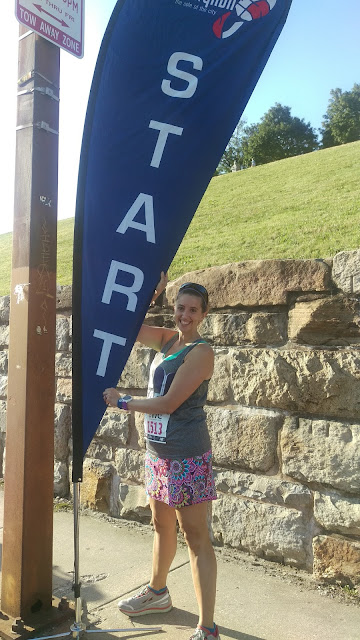 While waiting near the start line, Matthew and I consulted the course map to see where he would station himself to get some good pictures. We didn't have long to wait and soon enough, the race began and we were off!

My strategy for this race was to reserve as much energy as I could. It was sunny and warm and I tend to get dehydrated and very light headed when I run in the summer.


The biggest challenge of this course is the monster hill that you hit about a mile in. It's a heck of an incline but the good thing is that after that hill, there really isn't much elevation change throughout the rest of the course.

As you can see from the following pictures, the course was crowded. I'm not sure how many women raced this year but it felt close to 2,000. Given that I'm usually towards the middle-to-back of the pack, it was especially crowded on the parts of the course that narrowed. Sometimes I struggled to find room to slow down and take my walk breaks.

Despite the heat and the crowded course, I finished the race in 35:06. As I walked through the finisher's chute, I grabbed my medal, a bottle of water, and a cold towel- they take such good care of runners at this race. Then I walked towards a volunteer handing out roses- he went to grab one rose and accidentally came out with two as they were caught up on each other's stems and leaves. He said, "You get two!" with a big grin. I took both roses and immediately knew why I'd received two- one was for me; the other for Amanda.

After the race, I ran into two friends: Dr. Iannone, my undergrad psych professor, and Tara, an IG friend that actually won my blog's second birthday giveaway. It was awesome to see both of them and catch up. Matthew and I also headed over to a new vendor this year that was giving away free finisher photos. I also might have eaten some more watermelon :-)

All in all, this was another great Baltimore Women's Classic race. I was thankful for my beautiful new Enell for supporting me in style and always keeping the girls in their place. And I am so in love with this green color; it looks so great with my tanks/racer-backs.

I was also thankful for the 3.1 miles of quiet reflection I had during the race when I was able to think about Amanda's life and legacy that she left on this earth. It was a privilege to run every step with her name on my back. 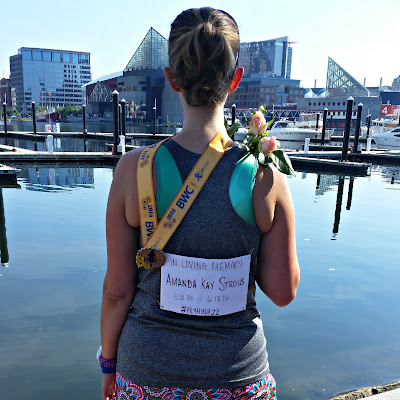 This event has all the elements of a great race: semi-challenging course, ice-cold towels and watermelon at the finish, free photos, awesome bling, and easy race-day logistics. I think this one will be on the calendar for years and years to come!

Have you ever done a race more than once? If so, why? If not, why not?