Last month, I ran the Charles Street 12 for the second time. Matthew and I ran it in its inaugural year, 2013, and decided to try it again this year- mainly because it was included in the B3 Challenge.

The B3 Challenge consisted of three races: Shamrock 5k, Sole of the City 10k, and the Charles Street 12. In addition to entry into the three races- and a cool medal- we also were promised a special premium; a jacket for men, a vest for women. This will be important later in this post.

So, my dad picked up our packets for us at my hometown's Charm City Run, a running store that also organizes this race. We arrived at my parents late Friday night and after checking out our cool premiums (long sleeved Under Armour thermal shirts), we set up our stuff for the race the next morning.


The morning of the race, we parked in a garage in downtown Baltimore (thank you, Parking Panda!) and then headed towards the buses. Since this race is a point-to-point, the race organizers suggested that we park at the finish (downtown), and catch the bus up to the start (in Towson).

We were one of the first buses to arrive at the shopping center where the start line was. At this point, Matthew and I went to pick up our B3 premiums (they were not in with our packets). Matthew picked up a beautiful, quarter zip Under Armour jacket with the B3 logo. I picked up.... a bag?! 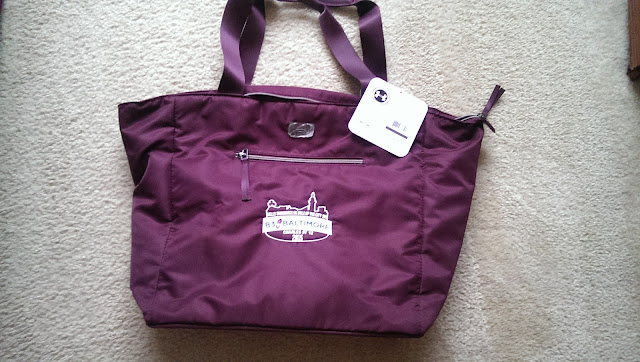 Yup, apparently, the race organizers were not happy with the quality of the vests that came in, so they swapped it out for a bag. A $60 bag. Don't get me wrong, it's a cool bag, but it's not quite equal to what the men got. Also, a heads up would have been nice- there were lots of complaints from the women on race morning. Side note- the finish on the metal Under Armour logo actually lifted off the piece in some places when I pulled the protective tape/cover off. Sad panda :-(

Anyway, we put Matthew's jacket in my bag and checked it. Then we settled in and waited for friends to show up.

I got to see my friend Megan (we used to be co-workers a loooong time ago), Jen (a fellow former J&A ambassador), Kelly (my sweetest friend and former roommate), and Cecilia (a sweet, sweet blog reader). We all stood around chatting and taking selfies until it was time for the race to start. Just like two years ago, there weren't enough port-o-potties and I ended up peeing in the woods before the race. Classy.

Kelly, Matthew and I decided that we were starting and finishing this race together. We all felt under-trained and thought the best strategy would be to take it easy and walk/run with 2:1 intervals- a little more walking than running.

We crossed the starting mat and I started my Gymboss timer. The three of us trucked along Charles Street, through the hills of Towson, past some of the most beautiful homes in Baltimore, and into the city.

I love this course because you get to see such cool parts of the city. We passed three universities (Towson, Notre Dame, Loyola), trotted through Mt. Vernon, and finished the home stretch through downtown and the Inner Harbor. We also got some awesome pictures along the way!

Before we knew it, we were crossing the timing mat at the finish. Our "slow and steady" plan worked: we finished upright and smiling. Honestly, it felt like more of a two and a half hour coffee date (sans the coffee!) rather than a race. It was wonderful to catch up with Kelly and the three of us just had a really good time.

After the race, we headed to the finishers area to get our beer and food and B3 medals. We got a full lunch (wrap, cookies, fruit) and two beers each. I ended up only eating a little bit of the lunch because I wanted to save the points for some donuts later :-)

Overall, we had a great time doing this race again this year. Despite the little snafu with the B3 premiums, this race was well organized and the course was challenging yet enjoyable.

Will we do this one again? Possibly. I'd really like to try it totally healthy and trained to see what I could do. Now that I've done this course twice, I think I could develop a good race day strategy that could result in a PR.

Do you run the same race multiple times? Why or why not?